Bitcoin heads toward US$40,000 as cryptos bounce back 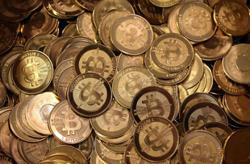 NEW YORK: Bitcoin rallied toward the US$40,000 (RM164,000) level as cryptocurrencies recover some of the ground lost in this month’s volatile rout.

The largest digital token climbed as much as 5.2% to US$39,588 (RM162,310), while the Bloomberg Galaxy Crypto Index advanced 8% as rivals like ether also gained. The gauge had one of its worst stretches ever last week.

While die-hard cryptocurrency adherents believe the bull market in bitcoin has just paused, other commentators are more circumspect.

The end of bitcoin’s streak “above the 200-day average, and the gigantic spike in volatility, are not good signs if history is any kind of a guide at all here, ” Sundial Capital Research Inc founder Jason Goepfert wrote in a note.

Musk in February plowed US$1.5bil (RM6.15bil) of Tesla’s corporate cash into the token and said the electric-vehicle maker would accept it as payment, before rescinding the latter decision this month.

While Musk has since said he strongly believes in cryptocurrencies as long as they don’t drive a massive increase in fossil fuel use, digital tokens are still nursing losses from his spate of recent actions and comments.

The volatility, regulatory scrutiny and worries about bitcoin’s environmental profile have dented the argument that the largest token will inevitably draw more mainstream investment.

Over longer time periods, virtual currencies are still sitting on big gains. Bitcoin is up 342% in the past year, ether more than 1,000% and meme-investment dogecoin some 14,000%. — Bloomberg