NEW YORK: Oil prices fell more than 2% on Thursday, marking a third day of losses, after diplomats said progress was made toward a deal to lift U.S. sanctions on Iran, which could boost crude supply.

Iranian President Hassan Rouhani said in a televised speech that sanctions on oil, shipping, petrochemicals, insurance and the central bank had been dealt with in the talks.

"That really weighed on sentiment and that pushed us down a little bit," said Phil Flynn, senior analyst at Price Futures Group in Chicago. "There’s room in the global market for more Iranian oil but in the short term that’s what is weighing on us today."

But European diplomats said success was not guaranteed and very difficult issues remained, while a senior Iranian official contradicted the president.

Indian refiners and at least one European refiner are re-evaluating their crude purchases to make room for Iranian oil in the second half of this year, anticipating that U.S. sanctions will be lifted, company officials and trading sources said.

"With global oil demand growth projected to be healthy for the balance of this year and in 2022, the (OPEC+) producer group is in a relatively comfortable position to deal with increasing Iranian output without undermining the oil rebalancing," PVM analysts said.

Concerns about the demand outlook in Asia also dragged prices down. Almost two-thirds of people tested in India show exposure to the coronavirus.

Speculation that the U.S. Federal Reserve might at some point start to tighten policy weighed on the outlook for economic growth and has prompted some investors to reduce exposure to oil and other commodities.

The Organization of the Petroleum Exporting Countries said that a stark warning from International Energy Agency to stop new fossil fuel funding could lead to oil-price volatility if it is acted on.

The IEA on Tuesday said investors should not fund new oil, gas and coal supply projects if the world wants to reach net zero emissions by mid-century. 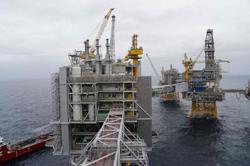