Finance Minister Tengku Datuk Seri Zafrul Abdul Aziz said the implementation of MCO3.0 was based on the SOPs adopted during MCO2.0 earlier this year which allowed economic activities to continue to operate.

PUTRAJAYA: The government's decision to keep the economy open on targeted basis during the third Movement Control Order (MCO3.0) is to protect certain groups, especially the vulnerable, as well as small and medium enterprises (SMEs).

Finance Minister Tengku Datuk Seri Zafrul Abdul Aziz said the implementation of MCO3.0 was based on the standard operating procedures (SOPs) adopted during MCO2.0 earlier this year which allowed economic activities to continue to function.

However, he stressed that social activities were still prohibited in view of current developments.

"Based on experience from previous MCOs and the latest data, the government has found the following: firstly, shutting down the economy will be detrimental to groups who are vulnerable and easily hit (by COVID-19).

"Secondly, if sectors such as manufacturing are not operating, it will have a lasting and continual impact on key sectors of the economy," he told a press conference on the implementation of MCO3.0 here today.

Tengku Zafrul said MCO1.0 had caused losses amounted to RM2.4 billion a day to the economy and the unemployment rate to soar to 5.3 per cent or 826,000 employees to be laid off in May 2020.

"This was the highest unemployment rate since the commodity crisis in the 1980s. If MCO1.0 is re-implemented, it is estimated that more than one million Malaysians will lose their jobs.

"What is more worrying is that the unemployment rate is uneven and more focused on the self-employed, youths, women and the low-skilled," he said.

Besides the unemployment risk, he said 2.8 million people comprising the self-employed, micro-SMEs and small entrepreneurs will be most affected by the reduction in income.

In comparison to MCO1.0, Tengku Zafrul said the unemployment rate was at 4.7 per cent or affected 753,000 individuals in March when MCO2.0 was enforced.

"It should be noted that we are still far from the unemployment rate of 3.7 per cent before the outbreak of COVID-19 in the country in 2019," he added.

Meanwhile, Tengku Zafrul said the automatic bank loan moratorium would not be implemented during MCO3.0.

"During MCO2.0, it was also not given as the economy was still open, ” he said, adding that however, affected groups and companies would continue to receive help from banks, just like during MCO2.0.

Bank Negara Malaysia yesterday said the comprehensive moratorium would not be automatically implemented again despite the nationwide MCO3.0 enforcement. - Bernama 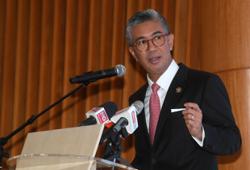