CHINA is turning to its state-owned coal power companies to helm the next stage of the country’s renewables push, as the sector becomes less attractive to other investors.

Now, as China chases a target to zero out carbon emissions by 2060, and with subsidies for renewables investments ending, government-controlled utilities need to take the lead.

The five biggest state-backed power firms have announced plans to develop about 305 gigawatts of new wind and solar capacity in the next five years, according to BloombergNEF, almost twice the amount it estimates the U.S. will install over the same period. At peak generation, the total being added would be about enough to power the whole of Japan.

"Carbon neutrality is a central responsibility of state-owned enterprises, ” Li Peng, director of strategic management at one of the companies, State Power Investment Corp., told the Clean Energy Expo in Beijing last month. "We must provide society with green power. Our industry must empower others to reduce carbon and reach carbon neutrality.”

While the firms plan to more than double their wind and solar capacity, they will also continue to add new domestic coal power projects, and pursue some fossil fuels developments overseas.

They’ll also benefit as China is forecast to burn a record amount of coal this year as its economy rebounds from the pandemic. Together, the major utilities control about half of China’s total coal power fleet.

The firms are accelerating renewable energy plans as government subsidies end and as authorities refuse to pay billions of dollars in past-due wind and solar fees.

That’s made returns uninviting for private developers, but still palatable for state-owned ones that can borrow money more cheaply and need to meet social obligations like helping achieve climate targets, said Jonathan Luan, a BloombergNEF analyst in Beijing.

By pressing power firms to transition to renewables, policy makers will be hoping to accelerate coal’s demise. Utilities rely mostly on China’s vast reserves of the mineral to fire their plants, and consumption of the dirtiest fossil fuel is expected to grow for at least the next five years as the economy expands.

President Xi Jinping wants the country to start reducing coal use from 2026 on its way to peaking emissions by 2030 and reaching carbon neutrality by 2060.

At the same time, coal’s role in ensuring national energy security becomes far less of an obstacle if its replacement is both domestically produced -- China is the world's leading manufacturer of wind turbines and solar panels -- and effectively inexhaustible.

"Renewable energy is built in China, and doesn’t rely on fuel that’s imported, so security on that front is pretty set, ” Luan said.

The plan to co-opt coal-fired generators is the strongest manifestation yet of Beijing’s top-down approach to ensuring net-zero emissions, a contrast with others including the U.S. and the European Union, that need to rely on massaging market rules to accelerate the shift to green energy.

In December, Xi said China would have 1,200 gigawatts of wind and solar capacity by 2030, implying new additions of about 350 gigawatts through 2025. The country is also set to add about 130 gigawatts of new coal capacity in that period, according to Wood Mackenzie Ltd.

In addition to the Big Five's plans, smaller state companies including China Three Gorges Corp., China Resources Holdings Co. and China Power Construction Corp. have also pledged to add more renewables through 2025. It means the current pipeline is enough to meet China’s energy targets even without any new projects from the private sector. 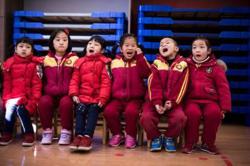