By RISEN JAYASEELAN and GANESHWARAN KANA

Jumping on the rubber glove bandwagon: Driven by the Covid-19 pandemic, numerous new players are getting into glove manufacturing. Will they succeed or is there going to be a repeat of the 1990s when the majority of the 200glove making outfits went out of business leaving only 40 or so players still standing?

DRIVEN by the Covid-19 pandemic, numerous new players in the country are getting into glove manufacturing. Many of these are by public companies whose announcements have attracted a fair bit of investor interest, considering the bumper profits the large players have been reporting since last year.

The question is, will they be able to churn out those dream profits? Or will they fall on the wayside as increased capacities catch up with the demand and nudge the average selling prices (ASPs) down? Other challenges include the need for automation, and dealing with environmental, social and governance (ESG) issues. Economies of scale will also determine the profitability of new players as they go head on with the big players.

Malaysia is the world’s largest exporter of rubber gloves, accounting for 65% of market share and led by the big four of Top Glove Corp Bhd

Recall also that Malaysia has had a chequered past with the glove manufacturing sector. In the 1990s, there was a gold rush to build rubber glove facilities. However, the majority of the 200 manufacturers then went bust or sold out, leaving only around 40 players that existed prior to the Covid-19 outbreak.

A number of new entrants, though, are well aware of the challenges and are prepared to do what it takes to succeed.

Even a seasoned industry player concedes this: “The newcomers must have done strong financial feasibility studies. They could be even clear that the lucrative nature of the sector won’t last forever and are trying to catch the wave and remain in business even after the euphoria. Otherwise, they would not be sinking in the millions.” is one of the more ambitious among the newbies getting into glove manufacturing, planning to build 42 lines within 20 months, with the hopes of hitting a revenue of RM2bil by then. The first of those lines will begin production in August.

If successful, that would clearly change the profile of the loss-making firm which is on the verge of disposing of its existing businesses.

Interestingly, for Johan Holdings, the venture into rubber glove manufacturing came about after a year of scouring potential business opportunities both locally and abroad. “We looked at more than 100 business investment opportunities. None met our criteria. Many were overpriced. The glove venture gives us the potential for the highest returns from our investment, ” says Tan.

, which is tapping its four decades of plastic manufacturing experience for the venture. It is expected to start some shipments this month, selling into the high-priced spot market and planning to eventually churn out 3.68 billion gloves from 12 lines.

Mah Sing is basing its business case on data from the Malaysian Rubber Glove Manufacturers Association or MARGMA that the rubber glove industry has been growing at an average of 8% to 10% for the past 25 years, even before the outbreak of the Covid-19 pandemic. The group also believes that there is excess demand for rubber gloves in the market, as the top-four producers’ supply lines are booked even up to early 2022. Mah Sing has even said that “if demand permits”, it will gradually expand up to 100 production lines to potentially produce up to 30 billion pieces of gloves per annum.

which is investing RM59mil to build eight production lines by September, reckons it can recoup its cost of investment within one year, says its executive director Kenny Khaw.

“After which, the internal rate of return (IRR) will be more than 100%, before tapering down to a sustainable IRR of 25% in future years, once the ramped-up production of the big players and new entrants are commissioned, ” Khaw adds.

One good source of industry data can be gleaned from two recently published prospectuses of rubber glove manufacturing companies heading for a listing (see sidebar).

On a positive note, both point out the unprecedented demand for gloves driven not only by the pandemic, but also the increase in hygiene awareness and the corresponding rise in glove usage in both the healthcare and non-healthcare sectors.

Other issues are the rise in living standards and wealth in many parts of the world, the ageing population which is putting more stress on the healthcare sector, the potential outbreaks of all virulent diseases and some governments’ tendency to stockpile personal protective equipment (PPE) which includes rubber gloves.

However, the research also points out that supply will surpass demand at some point, judging from the huge new capacity coming onstream.

Vital Factor Consulting, whose industry outlook is featured in the draft prospectus of Harps Holdings Bhd, predicts that by 2023, there will be a surplus in rubber glove production capacity.

New entrants will have to ride out that price swing MIDF Research’s glove analyst Ng Bei Shan says that the survivability of new entrants into rubber glove making depends on how they will do once demand is not at current levels.

“So, a lot depends on what ASP assumptions their projects are based on, ” she says.

For fund manager Lee Pak Seng of AIIMAN Asset Management, new entrants backed by weak balance sheets and limited experience are least likely to survive. “The expected pick-up in new supply from the second quarter (Q2) of 2021 onwards will be a real litmus test for the new entrants, ” Lee says.

He adds, “For a new entrant to be considered, we need to ensure if it is a real venture and if it will be sustainable and whether most of the potential upside has been priced in.”

As a result of newbies rushing to build new glove manufacturing facilities, the industry’s eco-system has been set alight. Experienced line managers are being pinched from the big-four Malaysian producers. Fabricators as well as mechanical and electrical (M&E) engineering firms with experience in building rubber glove manufacturing facilities are experiencing brisk business.

Interestingly, some fabricators who build rubber glove lines are themselves getting into the business.

Big money is being spent.

Johan Holdings is forking out RM652mil to get its plant up and running within 20 months to produce a whopping 12 billion glove pieces. If it hits its target of RM2bil annual revenues, it could turn out to be a handsome payoff.

But an official from one of the biggest players tells StarBizWeek some of the real-life challenges they themselves face. He says there are three main challenges – the ESG issues, continuous improvements in technology which can be capital-intensive, and dealing with the levelling out of ASPs in a few years’ time.

For ESG he explains, “Consider its labour-intensive nature, there are significant ESG issues such as forced labour and debt bondage.

“It costs tens if not hundreds of millions of ringgit to resolve these issues, which the major producers are spending. The question is, will the newcomers be able to start off with such robust social compliance?”

He adds that scale is crucial and that automation must be the “lifeblood of a glove manufacturer”. That in turn will not come cheap. Having the right skill sets is another challenge.

“A glove manufacturer these days must have a highly competent team and aim for best practices, not just in social compliance but in all aspects of running the business, such as supply chain excellence and raising the bar in terms of management practices, ” he adds.

For Haziq Zairel Oh, the CEO of Harps Holdings, dealing with buyers from overseas markets, especially the United States, takes a lot of time and effort. Harps will get listed on the Main Market of Bursa Malaysia soon and exports most of its gloves to the US.

“Expect numerous visits to your facilities by the customer or their representatives. Needless to say, the ESG issues are a top priority today.

That aside, buyers from countries like the US are also interested in your entire supply chain and your processes, right down to the types of chemicals used and the source of those materials, ” he says.

Raw material costs are the largest component, typically accounting for 50% to 65% of the total cost of production. Large-scale glove manufacturers with strong bargaining power over raw material suppliers typically enjoy cost advantages over other industry players, points out an analyst.

Interestingly, one of the newbies coming into rubber glove making has plans to even make the raw material.

“We source (our raw material) from our overseas suppliers. As the cost of raw materials constitutes approximately 60% of the total cost of producing the gloves,

it is imperative we address this existing issue of shortage of raw material supplies, especially if demand for gloves continues to outstrip supply.

Recognising this, Hong Seng has purchased 100 acres of land in Kedah Rubber City, which will be used to set up a nitrile butadiene latex (NBL) manufacturing plant.

NBL is the main raw material used for the manufacturing of gloves. We aim to be the first integrated glove and NBL manufacturer in Malaysia by having both upstream and downstream segments of the glove manufacturing supply chain, ” says Khaw of Hong Seng. 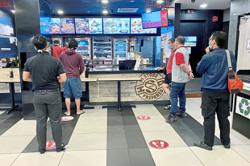