The new facility is the Nestle Group’s first in Asean and one of only two in Asia. The group’s other plant is in China.

Getting people to eat more plant-based food is a priority for the Nestle Group globally.

chief executive officer Juan Aranols is expecting demand to rise for plant-based meat in Malaysia and Singapore over the next five years.

Its halal-certified plant-based meals produced at the facility should hit critical mass in the next two to five years.

“It will take some time until this (plant-based meals) reach critical mass but if you put together great products that are affordable especially for the middle class, combined with our execution and capabilities to reach every corner of Malaysia, I have no doubt that this is going to be big, ” he told a media briefing at the launch of the manufacturing facility yesterday.

Aranols said the facility will cater to the Malaysia and Singapore markets initially before exporting to other Asean markets.

Located within Nestle Malaysia’s existing Shah Alam industrial complex in Selangor, the production site, with a build-up area of 6,000 sq m, has an annual production capacity of 8,000 tonnes and is equipped with the latest food processing machinery and highly-automated packing lines.

Nestle Malaysia invested RM150mil in the facility, which accounted for a major portion of the RM280mil capital expenditure in 2020 – the highest in the last six years.

Nestle executive vice-president and CEO (Asia, Oceania and sub-Saharan Africa) Chris Johnson said: “We have chosen Malaysia, and Selangor, as the location of this new manufacturing hub, as we find the right infrastructure, trade links and access to talent and capabilities here. We also build on Nestle’s 108 years of successful presence in Malaysia. We are confident that with this new facility, we will be able to capture the exciting growth opportunity for plant-based products in this region, which is a very important growth priority for the Nestle Group worldwide.”

The launch was officiated by the Sultan of Selangor Sultan Sharafuddin Idris Shah.

“In the same way as it is happening in other parts of the world, Malaysians are becoming interested in exploring alternatives to meat consumption, either because of health reasons or for environmental considerations, ” said Aranols.

“Compared with the equivalent meat-based products, these plant-based solutions are also more sustainable as they have a much lower carbon footprint and they require less use of natural resources such as water or land. By accelerating the rollout of our plant-based food and beverages we are taking steps to shape a more sustainable future for all, ” he added.

The plant has started production of Nestle Malaysia’s Harvest Gourmet plant-based products for the out-of-home market.

Nestle Malaysia will also launch its consumer range, to be available in retail nationwide and via e-commerce.

The plant-based meals are made from ingredients such as soy, wheat, beetroot, carrot, pomegranate and blackcurrant.

The range includes the Sensational Burger patty as well as Schnitzel, chargrilled pieces and ground mince products that can be easily integrated in home cooking recipes.

The new menu is aimed at those seeking to reduce their meat intake, while still enjoying the signature taste of South Korean fried chicken.

Aranols reiterated that there is a growing appetite for plant-based diets, as more people look for healthier food options. 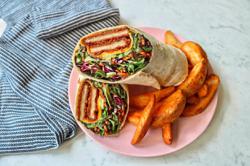