Insight - Just wait, ships are about to get even bigger

More to come: A man taking pictures of the Ever Given as it is tugged in Egypt’s Suez Canal. The next few generations of cargo vessels are going to make the Ever Given look like a bath toy. — AFP

IF you think the ultimate reason the Suez Canal got blocked last week is because container ships are getting too big, get ready for the future.

The next few generations of cargo vessels are going to make the Ever Given look like a bath toy. 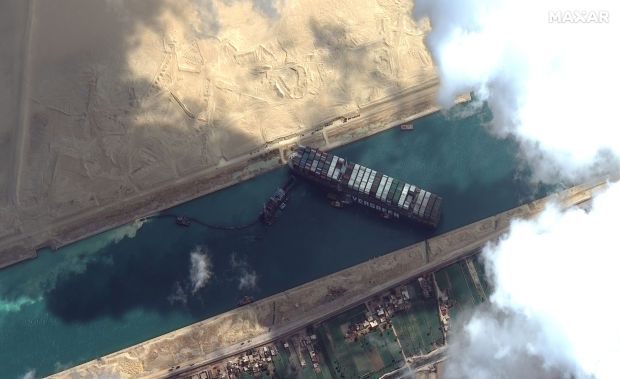 Big enough to carry 20,124 twenty-foot equivalent units, or TEUs – the standard measure for cargo, representing a single shipping container – the Ever Given was one of the world’s largest such vessels when it was launched in 2018. The first container ship to break the 20,000 TEU mark had been at sea for less than a year.

One famed 1999 study, written at a time when the largest boats carried less than 8,000 TEUs, argued it would prove impossible to build craft bigger than 18,000 TEUs.

The Ever Given, finally floating on its way again, is now distinctly in the second class of mega freighters. There are nearly 100 ships carrying more than 20,000 TEUs on the seas or under construction, and the bigger vessels being assembled in Chinese and South Korean shipyards are mostly around the 24,000 TEU mark.

A quarter of the capacity moved by the world’s largest container line, AP Moller-Maersk A/S, is on boats above the 17,500 TEU mark.

That’s unlikely to be the end of it. Chinese shipyard Hudong-Zhonghua Shipbuilding Group Co has already registered designs for a 25,000 TEU vessel, and it has become relatively commonplace to predict that 30,000 TEU monsters will be plowing the oceans before the decade is out.

Such enormous hulls may cause problems that will put the Ever Given’s mishap into the shade. At Rotterdam, the largest ships already have to arrive at high tide to ensure there’s enough clearance for them to get through the channel, according to a 2019 study by Nam Kyu Park of South Korea’s Tongmyong University.

Larger vessels will soon be unable to berth at Shanghai, Busan and Hong Kong even at high tide, unless channels are dredged out further, Park wrote.

There are similar problems with infrastructure on dry land. Modern ports are astonishingly efficient at unloading, and can turn around a fully laden 20,000 TEU vessel in a couple of days.

But the time spent waiting for a berth can cut deep into the wafer-thin economics of a container line. Longer quays may have to be built to accommodate the larger ships, as well as cranes that can reach across wider decks, larger loading yards for tens of thousands of containers, and faster rail and road terminals to take cargo to its next destination.

Current vessels are already at the limits of what can fit along major shipping lanes.

The Ever Given is too bulky to squeeze through the Panama Canal, where boats must be lifted over its mountainous spine with massive lock gates.

At 24m deep, the Suez Canal has more capacity – but it’s roughly as deep as the Straits of Malacca and Singapore, so dredging it further to accommodate bigger ships won’t help much.

The binding constraint on East-West trade at this point isn’t engineering, but geology.

Extending 15.7m below the water line, the Ever Given shouldn’t, on paper, have trouble making it through any of those channels, which typically require 3.5m of clearance from the bottom.

Next-generation ships with a 20m draught, on the other hand, would be at constant risk of grounding.

How have container ships managed to defy expectations that their size would hit fundamental limits? A large part of it is because the economies of scale are so compelling. Bigger vessels use more fuel, but relative to the number of boxes stacked on their decks they’re far more efficient. They can also turn around a larger number of containers at a time and serve a wider array of feeder ports, ensuring they can defray their massive capital costs quicker.

There’s little sign that this is about to change. New International Maritime Organisation regulations against the burning of sulfur-intensive fuel oil introduced last year mean current ships are using costlier diesel, putting more pressure on naval architects to come up with yet more efficient designs.

Even with a switch to cheaper, less polluting liquefied natural gas as the main fuel, that’s going to mean further drastic improvements in efficiency, not to mention propulsion technologies that don’t exist yet. To date, the best way to chip away at fuel consumption and emissions is by increasing size.

It’s hard to know how the industry is going to cope with this. Perhaps Suez, Malacca and Singapore can be dredged to accommodate even bigger vessels. Perhaps shipyards will find ways to squeeze a few more inches out of existing channels.

If not, alternative routes around the Cape of Good Hope and through the deeper Straits of Sunda and Lombok between Indonesia’s islands may prove the only viable way to accommodate such massive boats. Should that happen, those economies of scale will have to be drastically larger to make up for the longer sailing time. We’ve seen container ships leap from 10,000 TEUs to 24,000 TEUs. Don’t be shocked to see 50,000 TEU vessels plying the sea in your lifetime. — Bloomberg

David Fickling is a Bloomberg Opinion columnist covering commodities, as well as industrial and consumer companies. The views expressed here are his own. 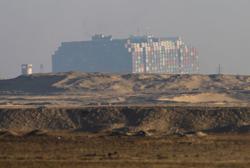