Everything from waning euphoria over the nation’s vaccine rollout programme to renewed worries about the state of the post-Brexit economy and a squeeze on public finances are taking the wind out of a rally that’s made sterling the biggest gainer this year among the G-10 currencies after the Canadian dollar.

LONDON: The risks to the pound’s 2021 recovery may be becoming too numerous to bear as Britain’s currency looks poised to end a five-month winning streak.

Everything from waning euphoria over the nation’s vaccine rollout programme to renewed worries about the state of the post-Brexit economy and a squeeze on public finances are taking the wind out of a rally that’s made sterling the biggest gainer this year among the G-10 currencies after the Canadian dollar.

It’s slipped about 1% in March so far, on track to interrupt an advance since September that drove it to its strongest level in almost three years.

“Too much optimism may be in the price, ” said London-based Mark Dowding, who this month reopened bets against the pound at BlueBay Asset Management LLP, where he oversees US$70bil (RM290.25bil). “The lockdown in the UK remains more restrictive than elsewhere, ” putting the shackles on growth.

The pessimism underscores the mounting difficulties faced by Prime Minister Boris Johnson. Questions over Britain’s future following its break last year from the European Union are taking centre stage again, even during one of the world’s most successful Covid-19 inoculation campaigns. Trade data showed EU shipments collapsed in January. The budget deficit is set to hit about 15% of GDP this fiscal year, the highest since the Second World War.

For Dowding, that means sterling may retreat more than 5% to US$1.30 in the next three months, a level last seen in November – when markets were being rattled by doubts over whether a Brexit deal could be reached.

The chances of the currency touching that level by year-end are almost 50%, according to Bloomberg probability calculations based on a combination of options and forecasts. Sterling closed on Friday at US$1.3770.

Some of the shine is already starting to fade. Data from the Chicago-based Commodity Futures Trading Commission in Washington show investors have started to trim bullish bets on the pound. After their long positions hit a one-year high earlier in March, leveraged funds scaled back their wagers for a third-straight week.

Even with a Brexit deal and an agreement on financial regulation out of the way, the UK’s departure from the EU has ushered in a fresh series of risks, including tension on the Irish border and a possible referendum on Scottish independence.

Brexit will bring “a slowdown in potential growth, so from a longer-term perspective we would expect sterling to resume its downward trend, ” said Seema Shah, the chief strategist at Principal Global Investors in London who sees the pound retreating to US$1.30 as early as the third quarter. “Once this vaccine rollout is done and other countries have caught up, and the UK no longer looks like a shining light, we’re back to where we were.”

Some 47% of the UK population had received at least one dose of vaccine as of March 25, compared with 41% in the US and just 14% in Germany, according to data collected by Bloomberg News and Johns Hopkins University.

That success has helped stoke optimism the country’s early reopening and a services-led recovery could put it ahead of its peers. The median forecast of analyst forecasts compiled by Bloomberg is for the pound to end June at US$1.39, compared with US$1.35 in early January.

“Negative sentiment toward the pound is gone, ” said John Roe, the London-based head of multi-asset funds at Legal & General Investment Management, which turned neutral on the pound-dollar after closing its short positions on Feb 25. “The UK is much less prone to a Covid-related relapse.” — Bloomberg 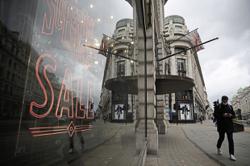