Still, there are strengths underpinning the industry, particularly for Asia’s semiconductor producers, according to BNP Paribas strategists Jason Lui and Cici Zhang.

IF the Nasdaq 100’s textbook rebound emboldens Asia tech bulls to buy the recent dip, they might feel they are getting a relative bargain in the process.

The 12-month forward price/earnings ratio for technology stocks in the MSCI Asia Pacific Index, which peaked in January at the highest since 2009 relative to the wider benchmark, has seen that spread narrow by almost half, according to data compiled by Bloomberg. That has brought relative valuations down to levels seen on a number of occasions over the last decade, something which still can’t be said about their US peers.

The MSCI Asia Pacific Information Technology Index has slipped about 1.4% so far in March, the most among sectors in the benchmark, which itself is up 0.7% through Thursday. The run of weakness sets the tech sector up for a second-straight month of underperformance for the first time since 2018, according to data compiled by Bloomberg.

Technology stocks last year benefited from lower interest rates and the shifting demands of the global pandemic, but the impetus of those themes is now going in reverse due to the run up in bond yields, said Shane Oliver, head of investment strategy with AMP Capital in Sydney.

“It’s a key consequence of the back up in bond yields and I think it has a lot further to run given the extent of outperformance seen by tech and growth stocks over recent years that is now vulnerable to being reversed, ” Oliver said.

The longer wait for earnings payoffs and high valuations makes the industry more vulnerable to rising yields, he said.

Still, there are strengths underpinning the industry, particularly for Asia’s semiconductor producers, according to BNP Paribas strategists Jason Lui and Cici Zhang.

These include the rebalancing of supply chains sparked by the US-China trade dispute and regional producers gaining market share, along with coronavirus-triggered output disruptions and chip shortages, they wrote in a note on Thursday.

“We expect these drivers to support the sector in the near term, despite recent profit-taking, ” the strategists said. — Bloomberg 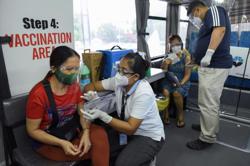