Challenges seen ahead for planters

PETALING JAYA: After enjoying the months-long rally that lifted crude palm oil (CPO) prices to a high that was last seen more than a decade ago, planters will need to brace themselves for a number of challenges ahead.

While persistent low palm oil stock levels have been instrumental in pushing CPO prices above the RM4,000-per-tonne range, there are views the commodity may not be able to sustain its price momentum too long.

Analysts are predicting palm oil production to recover strongly in the coming months, and as a result, boost planters’ inventories that would in turn exert pressure on CPO prices.

In addition, the weakening export demand could also soften further as buyers respond negatively to the high CPO prices currently.

Separately, the government’s decision last month to raise the cess on palm oil products is expected to be an additional headwind for the plantation sector, which is touted as one of the most taxed sectors in Malaysia. 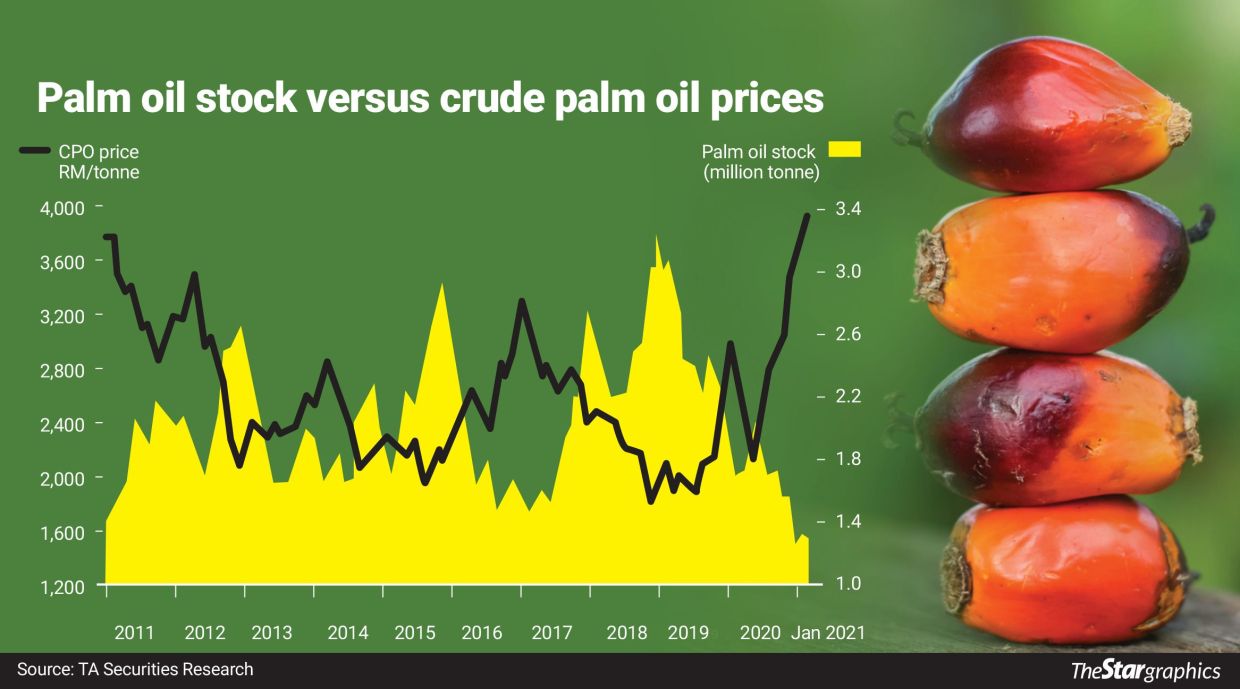 It is noteworthy that the cess has been increased by RM2 per tonne to RM16 this year.

MIDF Research said the impact of the cess will be bigger on pure upstream players’ earnings and they may find it difficult to pass the extra cost to end-buyers.

Looking ahead, analysts are largely neutral on the plantation sector’s outlook, although many believe that CPO prices in 2021 would average higher than in 2020, owing to the strong headstart this year.

Maybank IB Research analyst Ong Chee Ting said that the high CPO prices may have peaked or neared their peak, although he acknowledged that the tight supply currently would keep CPO prices “high for a little longer”.

“Barring unforeseen weather disruptions, we believe the price risk will be on the downside in the second quarter of 2021 (Q2), but more so in the second half of 2021 when output picks up strongly.

“Assuming decent weather in the Northern Hemisphere this summer, we do not discount the possibility of a record supply of soybean and soybean oils, which in turn will pressure vegetable oil selling prices by mid-year, ” he said in a note yesterday.

Based on the latest data from the Malaysian Palm Oil Board, the country’s palm oil inventory decreased in February by 1.8% month-on-month (m-o-m) to 1.3 million tonnes, after an increase in the previous month. The decrease was mainly due to lower production and imports.

“We believe the March production data, which could be higher m-o-m, is important to indicate whether the seasonal uptrend may come earlier than we expected, ” according to Chin.

She pointed out that her average CPO price forecast of RM2,600 per tonne in 2021 is currently under review, with potential for an upward revision.

The export data was lower than the market estimate of 950,000 tonnes to 1.05 million tonnes.

All major countries such as China, India and the United States showed lower demand for palm oil except for the European Union, which increased by 11.1% m-o-m to 108,000 tonnes.

According to Hong Leong Investment Bank Research analyst Chye Wen Fei, the plunge in exports was due mainly to seasonal factors as demand for palm oil is historically lower during the winter season.

In addition, the high CPO prices have in turn curtailed demand from price-sensitive countries.

Looking ahead, Chye expects a continued weak demand for palm oil from price-sensitive countries such as India and Pakistan.

“We believe CPO prices will remain elevated through Q1.

“Beyond Q1, we anticipate CPO prices to soften on the back of a better supply outlook for major edible oils (based on the assumption that the labour shortage in Malaysia will gradually ease from 2021 onwards), which will result in more balanced demand-supply dynamics, ” she said in a note.