has formally turned down an offer from Tan Sri Syed Mokhtar Albukhary to inject his plantation assets into the company for new shares.

The tycoon, via his investment vehicle Perspective Lane (M) Sdn Bhd (PLSB), had made the offer to acquire a major stake in FGV via a letter dated Oct 12, 2020.

""The Board of Directors of FGV wishes to announce that this proposition will not be pursued any further due to the unconditional mandatory take-over from Maybank Investment Bank Bhd on behalf of Federal Land Development Authority (Felda) to acquire all the remaining ordinary shares in FGV which are not held by the Offeror and its persons acting in concert," the company said in a Bursa Malaysia filing today.

In a separate filing today, Felda announced it has raised its stake in FGV to 73.88% after mopping up more shares in the open market and through direct deals.

Felda is offering to buyout minority shareholders in FGV for RM1.30 each. The takeover offer will close on March 15.

PLSB in October last year had expressed their interest to participate in FGV via an injection of plantation assets into FGV, for share consideration.

FGV had previously said it would deliberate upon the matter and evaluate the proposition. 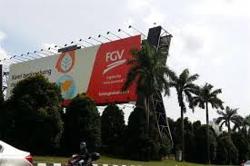