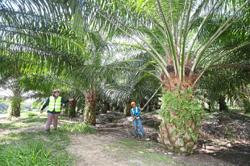 Khazanah Research Institute (KRI) study showed a 30 per cent reduction of labour from the current level would see production fall by half.

KUALA LUMPUR: Labour shortage is more detrimental to both estates and smallholders in Malaysia’s oil palm industry than a global price drop, according to a Khazanah Research Institute (KRI) study.

The institute said a 30 per cent reduction of labour from the current level would see production fall by half, and a further of 80 per cent would lead to a system collapse as production reached only 20 per cent from the business as usual (BAU) level.

"Therefore, a COVID-19 outbreak among the migrant workers in the oil palm estates could prove detrimental.

The study, titled "The Implications of the Dominant Shift to Industrial Crops in Malaysia: System Dynamic Model of Industrial Crops”, aims at identifying the key policy interventions towards revitalisation of the agricultural sector using a system dynamics modelling tool.

The specific objectives are to identify the structural and institutional factors and policies that drive the agricultural shift, identify factors that cause low productivity, to develop a system dynamics model to capture these relationships and to simulate alternative policy interventions.

Meanwhile, the study also revealed that Malaysia’s oil palm planted area was nearing its ceiling limit of 6.5 million hectares (ha), with 5.9 million ha belonging to large estates while 986,000 ha (17 per cent) was owned by smallholders in 2019.

It showed that to reduce the dependence on land, there was a dire need for the oil palm industry to improve yield, expedite replanting, reduce non-labour input cost to increase production and revenue.

"The replanting rate normally practised by the oil palm sector (in the country) is at 12 per cent, meaning that 12 new trees are typically planted per year for every 100 over mature trees.

"However, our simulations showed that the optimal replanting fraction to give the best yield per ha for an estate is 15 per cent, and a smallholder at 17 per cent instead of the usual 12 per cent, ” it said.

The study also found out that development support for smallholders would yield higher impact to them, particularly on their return per ha compared to the estates.

"Investments on the smallholders will create an inclusive growth, equitable distribution and hence sustainability of the oil palm sector, ” KRI said.

Historically, it said Malaysia was once a world leader in cocoa and rubber production. However, over time, there has been a dominant shift to oil palm.

According to Fatimah, the study showed that the dominant shift to oil palm was driven by higher oil palm profits over rubber and cocoa.

The study said currently, out of eight million ha of agricultural land, six million ha (74 per cent) was oil palm, with declining shares in the rubber and cocoa sectors (14 per cent and two per cent, respectively).

Meanwhile, the food industry takes up 10 per cent of the agricultural land in the country. - Bernama