The Department of Statistics Malaysia is expected to announce the industrial production index (IPI) for November and unemployment rate today. It will also release the monthly manufacturing statistics and wholesale and retail trade for November.

KEY economic data for this week will be the growth of industrial production and unemployment rate that will help investors and economists gauge the recovery of the economy.

The Department of Statistics Malaysia is expected to announce the industrial production index (IPI) for November and unemployment rate today. It will also release the monthly manufacturing statistics and wholesale and retail trade for November.

Economists expect a 1.5% growth in IPI for the month of November. In October, Malaysia’s IPI contracted by 0.5% year-on-year (y-o-y) after registering growth for three consecutive months since July, mainly driven by the moderation in the manufacturing sector.

The unemployment rate in October 2020 rose 0.1 percentage point to 4.7% as against September 2020 after registering a decreasing trend for four consecutive months since June 2020.

THE key Chinese data on the calendar are the producer price index (PPI) and inflation data followed by monetary indicators and trade towards the end of the week.

China’s official consumer price index (CPI) fell to minus 0.5% in November from a year earlier – down from a 0.5% growth in October 2020. The PPI fell 1.5% y-o-y in November, but was 0.6 percentage points slower than October.

Bloomberg estimates China’s exports to expand 15% y-o-y in December and imports to grow 5.7% y-o-y. It expects a trade surplus of US$71bil.

INDIA is expected to release its inflation data for December, industrial production figures for November and December trade data this week.

A Reuters poll predicted that India’s retail inflation likely fell sharply in December, landing within the Reserve Bank of India’s target range, due to a significant drop in vegetable and food prices.

The Jan 5-7 poll of around 45 economists suggested retail inflation fell to 5.28% in December from 6.93% in November.

Bloomberg estimates a contraction of 1.3% y-o-y for November’s industrial production.

THE Bank of Korea (BoK) is the only major Asian central bank with a monetary policy decision this week.

UOB Global Economics and Markets Research expects the BoK to keep its policy rate unchanged at 0.5%, as the low policy rate is still needed to support economic recovery.

The Bloomberg poll also showed an unanimous expectation of no change.

ATTENTION will be on several major United States banks reporting at the end of the week.

In addition, the Federal Reserve’s latest Beige Book report will be released this week.

Other data expected from the US this week include jobless claims, industrial production, consumer sentiment and retail sales. 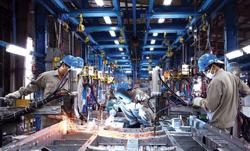