Federation of Motor and Credit Companies Association of Malaysia (FMCCAM) president Datuk Tony Khor: “As more people buy new cars, the more they will need to trade in their old ones. “In June, used car sales surged 80% year-on-year. In July and August, sales grew around 20% and 25% year-on-year respectively.”

PETALING JAYA: The Malaysian used car industry, which was severely impacted by the pandemic but saw a resurgence in sales following government incentives, is expected to record flat year-on-year growth for 2020.

Federation of Motor and Credit Companies Association of Malaysia (FMCCAM) president Datuk Tony Khor said business for used car dealers was severely hit from March to May, as a result of the movement control order.

“As such, the used car industry will only have had about nine months of business this year, compared with other years.

“However, the sales tax exemption and six-months moratorium helped spur sales in the second half of the year and we expect sales in 2020 to be on par with last year, which isn’t bad, ” he told StarBiz.

Under the short-term economic recovery plan or Penjana announced in June, locally-assembled cars will be fully exempted from sales tax while for imported cars, the sales tax will be cut from 10% to 5%, until Dec 31. Khor said the impact was immediate.

“As more people buy new cars, the more they will need to trade in their old ones.

Since October, Khor said sales have been slowing down due to the expiry of the six-months moratorium (which was implemented from April 1).

“Sales in November was up around 18% and we expect December to also be around the same. 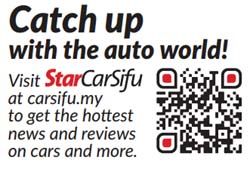 “Despite the economic uncertainty, used car sales have still been steady because the Covid-19 pandemic has deterred people from using public transport.

“Also, with so much uncertainty out there, people prefer to buy used cars because they are cheaper.”

Khor said Japanese cars were among the most popular used car models for buyers.

“Many of the cars are not only half the price compared with a new one, but the technology in most Japanese cars remain relevant for 15 to 20 years. So they are still popular among consumers even if the model is over a decade old.”

Going into 2021, Khor said the FMCCAM would be working on several initiatives to boost customer confidence and spur the local used car sector.

“We have several initiatives in the pipeline. Among them is a dealer development plan to help used car dealers with their business.

“We have started an online platform to assist 4,400 of our dealers when it comes to sourcing, inspection and valuation. We have access to a lot of data that would be useful for them when it comes to valuing a used car.”

Khor said the platform will boost transparency and professionalism, which will ultimately help boost consumer confidence.

FMCCAM also planned to roll out an extended warranty plan for used car dealers by the first quarter of next year.

Khor emphasised that the customer confidence levels in used cars is a lot lower in Malaysia, compared with other countries such as the United States, Japan and in Europe.

“In many countries overseas, the turnover rate of used cars are higher compared with new cars.

“However, in Malaysia, the turnover rate for used cars is 1.5% lower than new cars, because of weak confidence levels.”

Khor said the performance of the used car sector in 2021 will ultimately depend on how well the pandemic can be contained.

“If the vaccine is quick and effective, then we believe that the next two-to-three years will be positive for the local used car sector.”