Overall, 58% of Americans said in a Gallup poll here that ended Nov 1 that they would get vaccinated, up from 50% who were willing in a September poll. Forty-two per cent said they would be unwilling to get a vaccine, citing reasons such as the rushed development timeline and concerns about safety.

Overall, 58% of Americans said in a Gallup poll here that ended Nov 1 that they would get vaccinated, up from 50% who were willing in a September poll.

Forty-two per cent said they would be unwilling to get a vaccine, citing reasons such as the rushed development timeline and concerns about safety.

Delays in vaccine distribution or widespread refusal to be vaccinated would allow the virus to continue to circulate longer and delay the development of herd immunity, which occurs when enough people in a population have some form of protection that prevents the easy spread of a disease.

“To be certain that the world will be back to normal by mid-next year because a vaccine is available is an aggressive assumption, ” said David Albrycht, chief investment officer at Newfleet Asset Management.

“There’s a light at the end of the tunnel but we’re not sure how long that the tunnel is going to be, ” he said, citing uncertainties including whether a vaccine will be free or covered by insurance plans, its rollout and its public acceptance rate.

Citi Research wrote in a note that herd immunity would not form until late 2021, boosting global Gross Domestic Product growth by only 0.7% next year compared with an estimated 3% gain in 2022 as vaccination rates rise.

“The answer is not the vaccine; it’s vaccinations. The vaccine needs to be widely- adopted and accepted for it to work, ” said Ernesto Ramos, head of equities at BMO Global Asset Management.The US Food and Drug Administration will likely grant approval in mid-December for distribution of the vaccine developed by Pfizer Inc and German partner BioNTech and some healthcare workers could start getting shots a day or two later, Moncef Slaoui, chief scientific adviser for the US government’s Operation Warp Speed, said.

Some 70% of the US population of 330 million would need to be inoculated to achieve herd immunity, which is possible by May, he said.

Ramos said those estimates may be overly optimistic and the economic benefits of vaccinations will not be apparent until the second half of next year, increasing chances that the recent US economic slowdown could worsen.

Investors will get the latest US economic snapshot with data next week, including the monthly employment report.

Economists polled by Reuters expect the Dec 4 jobs report to show unemployment dipped to 6.8% from 6.9%, still well above the 4.5% rate in March, before much of the US economy went into lockdown.

Targeted vaccinations could revive the economy even with delays in widespread adoption, said Jonathan Golub, chief US equity strategist at Credit Suisse Securities.

“The successful vaccination of seniors and front-line workers could expedite the renormalisation process well before herd immunity is achieved, ” he said.

While vaccine adoption rates are a “wildcard, ” their availability removes the risk of another widespread economic lockdown, said John Buckingham, portfolio manager at Kovitz Investment Group.

He remains bullish on companies that will benefit from an economic recovery, including JPMorgan Chase & Co, Foot Locker Inc and Whirlpool Corp, even if the US economy remains bumpy over the next few months and coronavirus cases keep rising.

The United States recorded its 12-millionth Covid-19 case on Nov 21, and health experts have warned that Americans travelling for the Thanksgiving holiday will likely push case counts steeply higher.

“If the situation were reversed and you had good data on cases and hospitalisations for Covid but vaccines were flops, the stock market would be cratering, ” Buckingham said. —Reuters 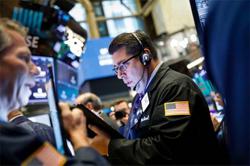