Productivity at risk: Analysts say the improvement in the plantations’ productivity in Malaysia could be at risk in 2021, assuming the foreign labour policy in the country remain unchanged.

PETALING JAYA: A prolonged labour shortage in the oil palm plantations nationwide is expected to trigger a larger-than-expected drop in crude palm oil (CPO) output both this year and next year, say analysts.

The situation is reflected by the latest October statistics released by the Malaysian Palm Oil Board (MPOB) yesterday – with CPO production down by 7.8% to 1.72 million tonnes and palm oil stocks tumbling to its lowest since June 2017 to 1.57 million tonnes respectively.

BIMB Securities Research said that based on what it had gathered from the industry players, the labour shortage issue is not really significant among public-listed plantation companies with estates in Sabah and Sarawak.

“However, if the problem prolongs, the impact will be severe going into next year.

“The industry fears that the shortage in labour will hurt palm oil production by delaying the harvesting and collecting of fresh fruit bunches (FFB) and hence, impacting labour productivity, ” the research unit said in its latest report.

Industry expert M.R. Chandran pointed out that the local palm oil sector could suffer some 3.3 million tonnes of CPO losses from the labour shortage issue this year.

He said the shortage situation would likely double to 62,000 workers from 36,000 workers if left unchecked by year-end.

“This can translate into some RM8.25bil loss in revenue for the plantation sector assuming the CPO price is traded at RM2,500 per tonne.”

Based on BIMB Securities’ on-ground check, the labour shortage in almost all of the companies under its coverage is below 10% i.e. in a range of 5% to 8% of the respective companies’ total workforce in Malaysia.

Assuming labour productivity of 1.5 tonnes per day with working days of 26 days per month and oil extraction rate (OER) of 20%, the research unit estimated that the revenue loss per year for plantation companies at different CPO prices and with number of labour shortage ranging from 100 workers to 3000 workers, would be RM23.4mil to RM842mil per year.

“The revenue loss will be much higher at RM31.2mil to RM1.12bil, if the labour productivity is increased to two tonnes per day with other assumptions remaining the same, ” BIMB Securities pointed out.

On CPO prices, BIMB Securities predicted that the average price for 2020 could reach as high as RM2,600 per tonne to RM2,700 per tonne this year, from its earlier forecast of RM2,500 per tonne.

Meanwhile, RHB Research believes that labour issues could have an impact on the local CPO output.

The improvement in the plantations’ productivity in Malaysia could be at risk in 2021, assuming the foreign labour policy in the country remained unchanged, it said in its latest report.

“If borders reopen in the beginning of next year, and the Covid-19 situation improves, it is likely that a lot of the foreign workers who were not able to go home this year (upon visa expiration) would do so next year.

“Although we understand the bulk of these restrictions have since been eased in recent months, there is still uncertainty among the foreign workers on what the current rules and regulations are, ” it said.

Nevertheless, should things become clearer in 2021, RHB Research noted that there is a risk the foreign workers who were previously meant to return home in 2020 would go home, and there would be no replacements allowed.

“This could result in possibly 20%-30% shortage of labour requirements for plantations in Malaysia – which could trigger a larger-than-expected reduction in CPO output next year, ” it added. 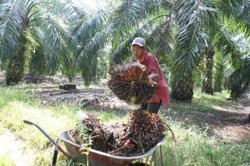