AS the sole shareholder of the country’s national airline, Khazanah Nasional Bhd is on the brink of making a call on whether or not to provide another lifeline to Malaysia Airlines Bhd or simply skip out on the ailing carrier.

There is no crystal ball to tell whether Malaysia Airlines will make it through this time even if Khazanah should decide to continue pumping in money given that the government has already given financial support to the airline over the past 20 years.

Like it or not, a decision is imminent as liabilities and debts continue to pile up.

As at end-2018, the carrier’s liabilities were just below RM5.5bil and on Oct 6, the airline announced an urgent restructuring of a whopping RM16bil worth of debt. Aviation analysts believe it’s time for Khazanah to reduce its ownership and look into a full privatisation as the best option to resuscitate the airline as the government doesn’t have enough budget to power the airline.

Finance Minister Tengku Datuk Seri Zafrul Tengku Abdul Aziz has consistently said the government would not inject any cash or capital into the airline and it is solely up to Khazanah to resolve the matter.

It was reported that parent company, Malaysia Aviation Group Bhd (MAG), had warned leasing companies that Khazanah would stop pumping funds into the group and was ready to shut it down if the ongoing debt restructuring exercise failed.

To-date, Malaysia Airlines still retains over 12,000 employees across the group but a salary cut measure has been implemented since early March this year.

The employment number has stayed despite the unprecedented event of Covid-19 as the airline took several measures, including extensive salary cuts, voluntarily unpaid leave and non-renewal of contract staff.

According to a report, if the plan to restructure the RM16bil debt fails, the airline group would consider executing Plan B, which is to inject funds instead into Firefly, a low-cost airline that is fully owned by MAG.

Firefly, which operates a fleet of 12 twin turboprops mainly within the country, could become the country’s national airline if Khazanah proceeds with the backup plan.

Venturing into the low-cost segment would give Khazanah more room to play in the market as it is relatively tougher to survive in the premium segment with Malaysia Airlines struggling to make payments owed to its creditors and lessors.

“As long as Khazanah is ready and willing to inject rakyat’s money, any Malaysian company with a valid air operator’s certificate (AOC) can be the new national airline. Who can stop Khazanah?” he says.

Bernama has reached out to Firefly for comments but was unsuccessful.

Meanwhile, another aviation expert who requested anonymity says Firefly’s niche has always been for domestic services through its turboprop fleets.

Therefore, keeping to the status quo will not give it any comparative advantage to become a national air carrier.

“However, by having less financial burden compared to Malaysia Airlines, it would be a good opportunity for Firefly to rescale, especially with a lot of narrow-body planes in the second-hand market and a leasing market with low rates.

“While the tourism industry as a whole has not picked up, it may be an opportune time to rescale Firefly before travel demand gains traction in the future, ” he said.

On the outlook as a new low-cost national carrier, he said it would be reasonable to assume that Firefly could compete with AirAsia

Group for domestic services but on a regional scale, AirAsia has developed a strong foothold in the Asean market.

“It will, of course, take time for Firefly to establish its presence regionally once international travel demand has picked up, ” he reckoned.

According to Centre for Aviation (CAPA) – one of the world’s most trusted sources of market intelligence for the aviation and travel industry – AirAsia is the largest low-cost carrier brand in South-East Asia.

Khazanah’s mandate is to grow Malaysia’s long-term wealth, to sustainably increase the value of investments while safeguarding financial capital injected into the fund.

It took Malaysia Airlines private in 2014 after forking out RM1.38bil to buy the remaining 30.6% it did not own.

This was part of Khazanah’s RM6.2bil major restructuring plan to revive the carrier, then commonly known as MAS.

Unfortunately, Covid-19 has halted the “good momentum” the national carrier was set to continue in 2020.

The government has openly sought for a strategic partner for the airline since last year with five proposals being received as of early this year, but the then-prime minister Tun Dr Mahathir Mohamad declined to reveal the suitors.

What does the future hold for Malaysia Airlines? It is Khazanah’s call. – Bernama 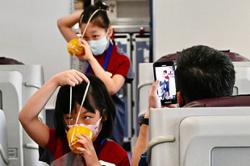