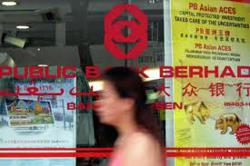 KUALA LUMPUR: Blue chips closed lower on Wednesday amid investors’ concerns about the on-going political issues and the halt in the Covid-19 vaccine trials.

Selangor, Kuala Lumpur and Putrajaya came under the conditional Movement Control Order (CMCO) on Wednesday and it will stretch for two weeks due to the surge in the Covid-19 infections.

Meanwhile, on the political front, Umno announced on Tuesday night that the party would set new terms for continuing its political cooperation with Perikatan Nasional through a written agreement.

Its secretary-general Datuk Seri Ahmad Maslan was quoted saying Umno would consider withdrawing support for Perikatan if the conditions were not met.

However, semicon stocks fared better with MPI chalking up a gain of 70 sen to close at RM19.91 while ES Ceramics surged 29.5 sen to 82 sen in active trade.

Glove makers were among the top gainers with Rubberex up 62 sen to RM8.02, Hartalega