It’s do or die for AirAsia X

(AAX), now at an existential crossroads, is in dire need of massive debt forgiveness from its creditors, or be prepared to shut its business down for good.

The low-cost, medium-haul airline, which has grounded all its flights due to the Covid-19 outbreak, is asking creditors and suppliers to forgo over RM63bil in liability and instead accept a maximum RM200mil in payment.

While the proposal may sound atrocious, analysts think many creditors would, in fact, accept the offer.

After all, if the proposed debt restructuring fails, the creditors will get close to nothing as AAX will be liquidated.

AAX’s aircraft lessors, in particular, may also struggle to redeploy their aircraft to other airlines during the pandemic, according to CGS-CIMB Research analyst Raymond Yap.

Yap describes the proposal by AAX as “fair and reasonable”.

He explains that the low-cost airline has proposed for creditors holding unsecured debts of RM9.2bil to accept a 98% haircut. This means for every RM100 lent to AAX, the airline will repay only about RM2 – within five years at 2% interest.

AAX is also asking its suppliers to waive their claims on an additional sum of RM54.3bil.

Yap points out that the amount relates to aircraft purchase commitments from Airbus, and estimated compensation or penalties arising from early termination of various contracts.

Another analyst who spoke to StarBizWeek also believes that many of the creditors and aircraft lessors would agree to the proposed debt forgiveness.

“Everyone in the aviation industry is affected now. It’s unreasonable to expect AAX to pay the huge liability at a time when planes are not flying.

“Creditors holding a minimum 75% of the unsecured debts must approve the debt restructuring proposal for it to pass. Chances are many of them will take it, ” he says.

The green light from aircraft maker Airbus is ultimately the biggest factor that will help AAX’s debt-restructuring plan to materialise.

It is believed that the biggest chunk of the RM63.5bil debt restructuring is the aircraft purchase commitment to Airbus.

In an email reply to StarBizWeek, an Airbus spokesperson said the company was in discussions with AAX “to find possible solutions at this very challenging time”.

However, the spokesperson declined to comment further, citing confidentiality.

AAX founder Tan Sri Tony Fernandes, who spoke to the media on Oct 8, agrees that “no one wants a haircut”.

“We are in unprecedented times. Should the airline wind up and you get 30 planes, what are you going to do with them?

“There’s no demand for them right now...or, we can all put our heads together and try to save the situation, ” he says.

The airline tycoon, however, believes that the operating environment for the aviation industry will eventually improve as countries reopen their borders.

“There will be better competition, better capacity and better fares, ” he says. 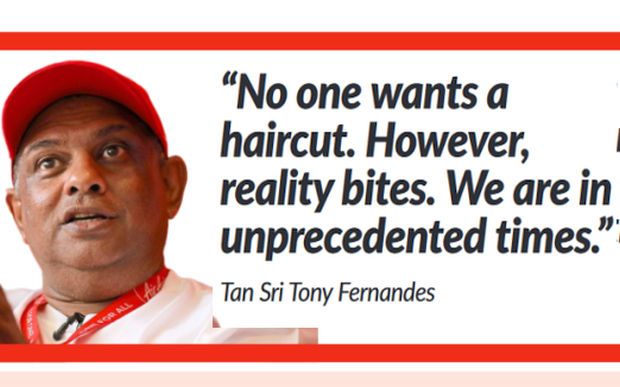 Over the past several months, the Covid-19 pandemic has literally brought the aviation industry to its knees, with various airlines globally shutting down or filing for bankruptcy as borders were closed and aircraft were grounded.

It is noteworthy that AAX is not the only airline seeking debt restructuring with its creditors and aircraft lessors.

On Oct 7, Reuters reported that the parent of Malaysia Airlines (MAS), Malaysia Aviation Group Bhd, has warned leasing companies that Khazanah Nasional Bhd will stop funding the group, forcing it into a winding-down process if restructuring talks with lessors are unsuccessful.

Trouble has been brewing at AAX over the past several years, especially after the low-cost carrier turned operationally loss-making since financial year 2018 (FY18).

The weaker ringgit, high fuel costs and a sharp decline in the number of travellers from China due to the trade war with the United States were among the major headwinds that hit the airline in recent years, at a time when it was cutting flights on unprofitable routes.

However, it was the pandemic that delivered the deadliest blow to AAX and pushed the airline to the brink of bankruptcy.

In the first half of FY20 ended June 30, AAX’s net loss widened to RM854.94mil, as compared with a net loss of RM163.78mil a year earlier.Its revenue, on the other hand, plunged by more than half to RM1.02bil as flights were forced to be grounded following travel restrictions.

AAX’s share price has continued to be on the downtrend for years, only to be worsened by the airline’s poor financial performance.

The proposal of debt and corporate restructuring on Oct 6, which includes a share capital reduction and share consolidation, failed to lift investor sentiment.

As of Oct 9, the counter closed at four sen per share, far below its initial public offering price of RM1.25 per share in 2013.

CGS-CIMB Research expects AAX’s stock price to fall further and hit the target price of zero based on its book value.

At the moment, analysts are overwhelmingly negative on the stock. A quick check on Bloomberg shows that five research houses have issued “sell” calls, while two have “hold” calls.

AAX’s predicaments are far from over, even if the proposed debt restructuring is approved by three-quarters of its creditors voting in an upcoming meeting.

The airline will need to raise capital, an industry observer says, “at least to cover its cash burn rate”.

“I believe there will be an arrangement for equity injection by the shareholders during the debt-restructuring talks, in order to convince the creditors, ” he says.

Fernandes, however, remains tight-lipped about potential capital injection by the shareholders.

Tune Group Sdn Bhd, which is the investment vehicle owned by Fernandes and Datuk Kamarudin Meranun, is the single largest shareholder of AAX with a 17.8% stake.

This is followed by AirAsia

The success in concluding the debt restructuring will be key in giving AAX a fresh start with a lower operating cost base.

KAF Equities analyst Max Koh views the proposed restructuring as a “hard reset” for AAX to remain a going concern.

“If all goes well, AAX intends to operate with a leaner and lower-cost structure – it hopes to start flying with two planes in the first quarter of 2021.

“With a leaner balance sheet, it would also pursue new contracts with stakeholders, ” says Koh.

No impact to shareholdings