LONDON: The new boss of Tesco, Britain’s biggest retailer by sales, has backed the strategy of his predecessor despite a drop in first-half core profit as Covid-19 costs and losses at Tesco bank outweighed a surge in sales.

“I think you can take it that I’m really happy with the strategy and direction of the company, unless you actually see it changing in the stores, ” he told reporters.

“My job is to maintain momentum in the business and keep us focused on delivering a brilliant Christmas, ” he said yesterday.

Murphy said it was too early to talk about longer-term strategic opportunities.

He said he had no plans to exit any more overseas markets or sell Tesco Bank, which swung to a first half loss as it braces for a surge in virus-related bad debts.

In his six years at the helm, Lewis put Tesco back on track after an accounting scandal and refocused the group on its home market.

Tesco still faces major challenges, most notably the economic impact of the pandemic and potential disruption when Britain’s Brexit transition period finishes at the end of 2020.

Shares in Tesco, which has a 27% share of Britain’s grocery market, went sideways during Lewis’ tenure and last week the group briefly lost its position as Britain’s most valuable food retailer to online specialist Ocado.

UK like-for-like sales jumped 7.6% as shoppers continued to eat more at home due to Covid-19-related restrictions on socialising, having been up 8.7% in the first quarter.

However, the cost of coping with the pandemic – including extra staff – amounted to £533mil.

Tesco Bank made a loss of £155mil, driven by a provision for potential bad debts and reduced income.

The £8bil sale of Tesco’s Thailand and Malaysia businesses, agreed in March, is expected to be completed in the second half, allowing Tesco to return £5bil to shareholders via a special dividend.

Tesco also named Tate & Lyle’s Imran Nawaz as its new finance chief. He will succeed Alan Stewart who retires in April. An interim dividend of 3.2 pence is being paid. – Reuters 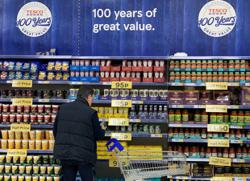