Borneo Oil executive director Raymond Teo Kiew Leong said the newly opened BAF outlet covers a 3,000 sq ft floor area and provides about 120 seats in a two-level shop. The popular Sarawak Laksa and Garoupa fish noodles from Sabah are the signature dishes. Other items on the menu include fish burger and SugarBun’s roasted chicken. (File pic shows Raymond Teo checking on sales with waitresses of a restaurant in Kuching)

’s drive to promote some of the most sought after dishes from Sarawak and Sabah to food lovers in Peninsula Malaysia has reached another level with the opening of the second franchise Borneo Asian Food (BAF) outlet along Jalan Tuanku Abdul Rahman near Chow Kit in Kuala Lumpur.

And more franchise BAF outlets are in the pipeline in the federal capital.

The popular Sarawak Laksa and Garoupa fish noodles from Sabah are the signature dishes. Other items on the menu include fish burger and SugarBun’s roasted chicken.

“We are targeting high traffic working class consumers for the BAF restaurants, ” he told StarBiz. According to Teo, the Borneo Oil-owned BAF outlet in Menara Hap Seng, Kuala Lumpur has been doing brisk business since it commenced operation four years ago.

He said the plan to set up two more franchise BAF outlets this year in Hap Seng-owned properties in the peninsula has been put off to 2021 due to the Covid-19 pandemic which has affected the food and beverage business.

“We have one BAF outlet in Johore Bahru.In Sarawak, there are one outlet each in Kuching and Miri and the proposed third outlet at Boulevard Mall, BIntulu has delayed its opening to end-2020 due to the pandemic, ” said Teo.

On overseas expansion of SugarBun restaurant, he said the opening of the first franchised restaurant in Jarkata, Indonesia has also been delayed because of the pandemic.

“We plan to next expand to New Zealand

“The plan to establish the first franchise SugarBun outlet in Auckland is being finalised, ” added Teo.

Currently, there are franchise SugarBun restaurants in oil-rich Brunei, Australia and China.

There are some 80 Sugarbun restaurant, mostly in key and secondary towns in Sarawak and Sabah.

Teo said Borneo Oil is expected to launch its own food delivery services system soon as about 60% of SugarBun sales are now from delivery service as the number of consumers dining in has sharply dropped due to the restrictions related to Covid-19 lockdown measures.

The collaboration has boosted SugarBun sales.

Once launched, Teo said SugarBun will have its own delivery services in all towns where its franchise outlets operate.

“We are going to have a tie-up with Sarawak Pay, ” he said. (Sarawak Pay is an initiative of the Sarawak government to provide a one-stop mobile app payment channel for the public to make payments for bills or purchases through their mobile phones.)

In financial year ended June 30(FY2020), Borneo Oil’s food and franchise operations recorded lower revenue of RM41mil from RM48.4mil in FY2019, dragged down by the sharp decrease in sales in 4Q2020 at RM7.37mil against RM12.5mil in 4Q2019, or down by RM5.14mil due to the movement control order (MCO) imposed by the government on March 18 to contain the spread of the pandemic. 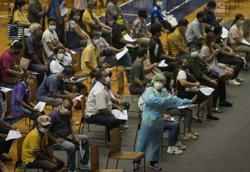