FMM president Tan Sri Soh Thian Lai (pic) pointed out the survey’s business activity index fell to a record low of 31 in the first half, compared with 90 a year ago.

KUALA LUMPUR: With many manufacturers expecting a long road to recovery for their businesses to return to pre Covid-19 levels, more layoffs in the Malaysian manufacturing sector could be seen in the coming months.

This is according to a recent survey by the Federation of Malaysian Manufacturers (FMM) and Malaysian Institute of Economic Research (MIER).

The FMM-MIER Business Conditions Survey (first half 2020) indicated that 42% of Malaysian manufacturers will reduce headcount by 10% to 20% from 2021.

About 66% of the survey’s respondents said they need to reduce labour costs, while 43% are freezing headcount.

An indicator of business manufacturing confidence, the semi-annual survey’s 17th edition since 2012 was done in July and had 549 respondents.

About 53% of the respondents are likely to implement pay-cuts.

Around 82% of the survey’s respondents suffered a drop in revenue, and 81% reported lower profits in the first half due to economic disruptions resulting from the global Covid-19 pandemic and movement control order (MCO) in the country.

FMM president Tan Sri Soh Thian Lai pointed out the survey’s business activity index fell to a record low of 31 in the first half, compared with 90 a year ago.

Soh noted in terms of business recovery, nearly 72% of the respondents said it would take four to 24 months to recover to pre-pandemic levels.

He reiterated the association’s call for the government to look into extending the six-month blanket moratorium on bank loan repayments, to the year-end.

“We ask for a further extension of three months.

“After end-September, the micro business and small and medium enterprises (SMEs) will have cash flow issues when they need to restart loan repayments.

“Many are likely not to survive although the banks will deal with them on a case-by-case basis, ” said Soh.

Soh pointed out Malaysian manufacturers are taking a pessimistic stance on their business prospects for the rest of 2020.

The survey’s index for expected business activity for the second half fell to a record low of 76, compared with 101 a year ago.

“This indicates business activity will be scaled down in the coming months, ” he said.

Meanwhile, capital expenditure (capex) and hiring in the manufacturing sector are expected to slow down further.

Only 19% of the respondents are planning to increase their capex soon, while another 36% are contemplating lowering theirs, compared to 24% and 19% in the preceding survey, respectively.

About 16% will likely recruit more employees, while 23% have retrenchment plans, compared to 17% and 13% respectively, previously.

Also, projections on domestic and export sales in the next six months are lacklustre.

About 49% of the respondents who sell their products locally and 50% of exporters are bracing for a dip in sales in the months ahead.

The expected indices for production volume and capacity utilisation also plunged to their lowest levels in the latest survey.

46% of the respondents will likely cut down on their production, while 24% are looking into expanding theirs, compared to 33% and 26%, respectively, in the prior survey.

In terms of sustainability, about 34% of the respondents believed they can sustain their businesses for more than 12 months, followed by 18% (only for four to six months) and 9% (for 10 to 12 months).

About 25% were not affected at all.

“Of course, the rubber glove manufacturers are doing even better than ever, ” he said.

Regarding their strategies for business recovery, the respondents said they will implement lean manufacturing - minimise waste and maximise production (61%), as well as training and upskilling (49%) of their staff this year. 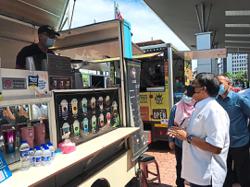