CGS-CIMB told clients in a note that an OPR cut is negative for banks, as the downward re-pricing of lending rates has historically been wider than the decrease in deposit rates, leading to potential narrowing in banks’ net interest margins (NIMs).

PETALING JAYA: The overnight policy rate (OPR) which has been cut for the fourth straight time is an added negative for banks which are already competing for a pie that has gotten smaller in recent months.

The Covid-19 pandemic is mostly to be blamed for this, as it has put off many potential consumers from taking on loans - a main source of income for banks – and has also exacerbated the already competitive environment that banks operate in.

The OPR is a benchmark rate used by banks to set rates including deposit and lending rates and is normally cut to boost consumer spending in an economy which is struggling to grow.

When the OPR is lowered, borrowing money from banks tends to become cheaper for consumers.

But this will also hurt the income of banks which have to lend money out at lower interest rates.

CGS-CIMB told clients in a note that an OPR cut is negative for banks, as the downward re-pricing of lending rates has historically been wider than the decrease in deposit rates, leading to potential narrowing in banks’ net interest margins (NIMs).

Though a rate cut will help businesses reduce their borrowing costs, it may not be sufficient to boost the FBM KLCI performance as bank earnings will be negatively impacted, the research outfit added.

The OPR was lowered by 25 basis points (bps) to 1.75% on Tuesday, the lowest it has ever been in a move to accelerate the rate of recovery of the economy and further stimulate the country’s economy, according to a statement by the Finance Ministry.

AmInvestment Bank banking analyst Kelvin Ong said he now expected NIMs for the sector to be compressed by 13bps on average.

“Every 25-bps reduction in the rate is expected to impact most banks’ NIMs by two to four bps and net profit by 1% to 3%, ” Ong said.

While Ong expects a further rate cut of 25bps in the second half of this year, analysts at CGS-CIMB believe that it should remain on an extended pause for the remaining of the year.

“With (the) cut bringing the cumulative reduction this year to 125bps, we think monetary settings have been sufficiently recalibrated to reflect the severity of the economic downturn caused by Covid-19.

“We project the OPR to remain on an extended pause at 1.75% in 2020, with the likelihood of policy normalisation only envisaged in the second half of 2021, ” the research outfit said.

“There are likely to be still certain loans falling into the impaired loan bucket after the moratorium ends attributed to the cessation of businesses and higher unemployment rate, ” he said.

Notably, banking stocks held up generally well yesterday despite the OPR cut, suggesting that the cut had largely been priced in.

all saw their stocks ending the day higher.

Ong said an upgrade on the banking sector could happen when the economy stages a recovery, amid early signs of an uptrend in the interest rate cycle and stabilising provisions with a gradual decline in allowances for future loan losses. 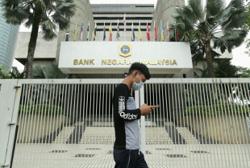