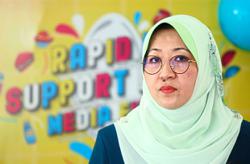 PETALING JAYA: Prasarana Malaysia Bhd's search for a new CEO may take a while more as none of the potential candidates suggested by the Finance Ministry are deemed suitable so far.

Tajuddin, who was appointed chairman on May 11, chaired his first board meeting on Monday.

Prasarana has been left without a CEO since January after incumbent Datuk Mohamed Hazlan Mohamed Hussain was widely reported to have been suspended, though Prasarana itself has not issued any statement on the matter.

"Do we need to announce it? We are waiting the matter to be cleared by the shareholder, the Finance Minister. We have received nominations from MoF, but the Prasarana board has to be satisfied of the candidate's suitability," Tajuddin said after touring the depot for the MRT Kajang Line (formerly known as the Sungai Buloh-Kajang Line) at Sungai Buloh.

"At the moment, the board has decided not to accept the nominated candidates, for various reasons," he said without naming any particular candidate.

"We will ask for more names from the ministry. They (MoF) are the boss, but we are the ones doing the work. Therefore, the board must be satisfied first as the candidate will be working for the board," he said.

In Klang Valley, Prasarana operates the MRT, LRT and KL Monorail under its subsidiary Rapid Rail Sdn Bhd, and a fleet of buses, including the Sunway BRT, through Rapid Bus Sdn Bhd. It is also contracted to operate the fleet of MRT feeder buses owned by Mass Rapid Transit Corporation Sdn Bhd, as well as the GoKL bus services.

Outside of Klang Valley, Prasarana has also won contracts to operate stage coach services in urban centres such as Penang, Taiping and Kuantan.

The Covid-19 pandemic has severely dented Prasarana's takings from the farebox, with rail ridership alone plunging 90% at the height of the fear.