PETALING JAYA: It seems that a fresh lease of hope has emerged in the Malaysian manufacturing sector as companies restart their production.

After hitting a record low in April 2020, the strong rise seen in the country’s Purchasing Managers’ Index (PMI) for the month of May indicated that the economic downturn caused by the Covid-19 pandemic has bottomed out.

To be sure, the PMI remained in the contraction territory, although the index rose sharply to 45.6 in May as compared to April’s 31.3.

The PMI, compiled by IHS Markit, has continued to be under 50 since January this year.

According to its chief business economist Chris Williamson, the country may see a return to growth as it heads into the third quarter of 2020.

However, he pointed out that a recovery to pre-pandemic production and gross domestic product levels seemed to be long and slow.

“Export demand in particular looks set to be weak for some time as Covid-19 restrictions will inevitably need to stay in place and continue to dampen economic activity around the world, ” he said.

Looking ahead, IHS Markit said there were signs of optimism as survey data pointed to a rise in business confidence.

The Future Output Index rose to a three-month high, with stronger sentiment underpinned by expectations of a recovery in demand.

“Firms hoped that this would drive production volumes higher in the coming months, ” it said. He further added that the news over the reopening of the economy has gained momentum across the globe.

“If such a trend can be sustained, we can expect the PMI would be approaching the 50-point benchmark in the third quarter of this year and perhaps returning to above points in the final quarter of the year, ” he said.

Afzanizam, however, cautioned that the downside risks are “very much visible”.

These include the bilateral relationship between the US and China, which is not supportive for global growth.

“The relapse in the trade war could potentially tamper the ongoing economic recovery, ” he said.

Meanwhile, Alliance Bank chief economist Manokaran Mottain (pic below) said that despite the sharp rise in Malaysia’s PMI for May, it still showed deterioration within the manufacturing sector as the index was below the neutral level of 50. “It is merely showing that May’s condition is not as bad as April.

“Similar industrial trends were seen in neighbouring countries such as the Philippines, Vietnam and Thailand, whose readings are still below 50, ” he said.

Manokaran believes that the PMI would improve over the next couple of months due to the easing of the movement control order, with the index potentially hitting the neutral level of 50.

“However, the improvement may not be significant due to persisting depressed domestic and global demand.

“The recovery of external demand will be a major catalyst for the Malaysian manufacturing sector, ” he said.

On the other hand, Afzanizam stated that the catalyst for manufacturing would come from domestic-oriented industries.

The implementation of infrastructure projects would lead to more activities in the construction sector and this will help improve demand for manufacturing and services industries.

“So, manufacturing of food and beverage-related products, textile, furniture and others, which are geared towards domestic consumption, would lead to more manufacturing activities, ” he said. Malaysia's manufacturing PMI up sharply to 51 in June 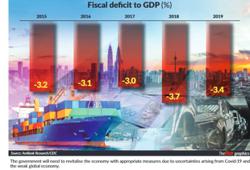 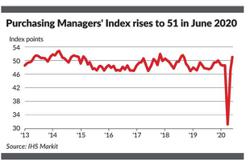