European manufacturing emerges from lockdown with Italy in lead

Economists expect them to announce an increase in emergency asset purchases by 500 billion euros (US$555bil) to cushion a slump that president Christine Lagarde expects to be between 8% and 12%.

FRANKFURT: Eurozone factories started down their long road to recovery after governments lifted lockdown restrictions, offering hope that the economy could return to growth in the coming months.

Measures of manufacturing activity across the 19-nation region pointed to a noticeable easing in the pandemic-induced downturn in May, even though output and orders continued to decline, according to a survey by IHS Markit.

The data are some of the last European Central Bank (ECB) officials will receive before they set monetary policy on Thursday.

Economists expect them to announce an increase in emergency asset purchases by 500 billion euros (US$555bil) to cushion a slump that president Christine Lagarde expects to be between 8% and 12%.

The ECB will publish updated projections with its policy decision.

In May, manufacturers continued to sharply reduce staff and lower prices amid weak demand weak and mounting competitive pressures. At the same time, they turned less pessimistic about the year ahead.

“While we are still set to see unprecedented falls in industrial production and GDP in the second quarter, the survey brings hope that the goods-producing sector may at least see some stabilisation – and even potentially a return to growth – in the third quarter, ” said Chris Williamson, an economist at IHS Markit.

In Italy, where total output contracted 5.3% in the first quarter, significantly more than initially reported, more than a third of companies surveyed reported an increase in output last month – up from 7% in April. — Bloomberg 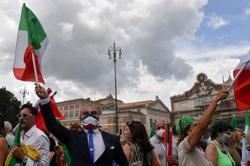 Economists expect China's GDP to return to growth in Q2