Proton’s digital journey had started on Oct 17,2018, when customers were able to book the Proton X70 online for just RM99.

Against the slump in car sales, Perusahaan Otomotif Nasional (Proton) has seen a 350% jump in online bookings during the movement control order (MCO) period compared with the first two-and-a-half months of the year.

The national carmaker is assessing if this could be the beginning of a digital trend as it plans to further interact with consumers online.

Even while still studying the trend, capabilities will be developed to transact with customers digitally, especially in view of social distancing that has become the new normal.

Affordability is still a major consideration, while in the face of bread and butter issues, consumers are mostly buying out of a need for these vehicles.

Much growth in the MCO period from March 18 to date was powered by its low online booking fee and it could have been inflated as consumers had no alternative channels to book a Proton car.

“But it might also be the beginning of a trend where more and more consumers are willing to transact online, ’’ said Proton.

These bookings will later be converted into sales once its outlets are reopened.

Actually, digital bookings are only a further step for consumers, the majority of whom are already conducting research online, from reading reviews, scanning owner groups to finding out about equipment levels.

Physically, it was impossible to sell cars during the MCO period, as showrooms were closed and customers could not go for test drives; government departments such as the Road Transport Department was shut, and financial institutions unable to disburse loans.

Despite these limitations, the company continued to connect with its customers through various touch points such as Facebook, Instagram, its website and even the homepage on its apps.

Updating consumers on attractive promotions, it also informed them on servicing and warranty practices.

Proton’s digital journey had started on Oct 17,2018, when customers were able to book the Proton X70 online for just RM99.

They were also able to view the full details of the car, except for the price, on a virtual showroom.

By the time of its launch on Dec 12,2018, the Proton X70 had attracted 10,000 bookings online; this strategy had also successfully filtered down to other models so that by the time the MCO was suddenly announced, Proton still managed to clinch that surge in online bookings.

During the MCO period, customers could book online a Proton Saga, Persona, Iriz or Exora for just RM9.99.

These four models, with lower price points, had received the highest number of bookings; the booking fee for the Proton X70 was at RM99.

Sales growth last year was powered by factors such as a refreshed product range, additional perks and improvements in its 121 outlets; these are its tools to attract new buyers and current owners back to the brand.

With the launch of the Proton X70, the company had updated its entire model offerings in less than nine months, with improved specifications and at lower prices than their predecessors.

Additional benefits included free labour for a number of service appointments and free data for cars featuring its intelligent head units. In view of job losses and business disruptions, it would be natural for many to put off making big ticket purchases, like buying a car.

But Proton has seen that a lot of car purchases are based on fulfilling a need; if they can afford to do so, consumers will still buy cars.

As the affordable range remains the most popular, Proton will stick to selling cars that appeal to the majority of Malaysians even as it explores new market niches.

While evaluating several strategies for the post Covid-19 environment, it will “need the flexibility to pivot, to take into account the uncertainty we now face.’’

“It will take time to ascertain what the future holds’’ but it aims to focus on advanced products, offer a premium sales and service experience, deliver value for money and expand its reach by opening new outlets, as the basis of its growth strategy.

This pandemic has certainly put a lot companies at the crossroads.

We wait patiently for their next move. 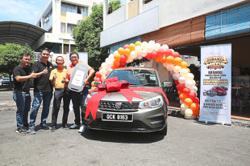 Sunny Side Up: Can online therapy help with Malaysias mental health crisis?