has announced the appointment Datuk Seri Mahdzir Khalid, a member of parliament of Padang Terap and UMNO vice president as its new non executive chairman.

TNB's board of directors today has approved the appointment for a period of two years, effective May 12.

Ahmad Badri, earlier this month, had retired from his post as Treasury secretary-general and was made the chairman of the Employees Provident Fund. 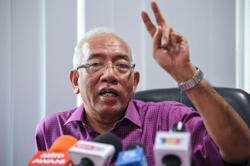