According to Affin Hwang Capital Research, the Covid-19 stress has dampened the banking sector outlook in 2020

PETALING JAYA: The outlook remains unfavourable for banks in Malaysia, as earnings are expected to shrink, while assets might deteriorate while liquidity and funding could come under pressure due to new measures introduced by Bank Negara.

According to Affin Hwang Capital Research, the Covid-19 stress has dampened the banking sector outlook in 2020.

“A contraction in loan growth is expected for 2020, coming from the auto, residential property, commercial property and trade financing segments, ” the brokerage said in its report yesterday.

It projected a decline of 3% in industry loan for this year.

In addition, Affin Hwang noted banks continued to face asset quality risks from their oil and gas portfolio. This would largely affect big banks such as Malayan Banking Bhd

In addition, if the central bank took heed of Finance Ministry’s heed to waive interest/profit charges on the deferred instalments/principal for hire-purchase (HP) loans, banking institutions would have to then take a larger impact of a “modification loss” on their respective income statements, the brokerage explained.

“Banks with larger HP exposure as a percentage of their loan book, that is, Public Bank Bhd

“Affin Bank Bhd and AMMB may potentially have a larger modification loss being recognised in their income statement vis-à-vis banks with more variable rate loans arising from the moratorium period granted, ” it added.

Bank Negara, in its announcement on April 30, said borrowers who took up the six-month moratorium offered would have interest/profit charged on their deferred HP loans or fixed-rate Islamic financing instalment amounts.

“We maintain our sector Underweight call, as we project a deterioration in earnings while the introduction of additional measures by Bank Negara has put further pressure on banks’ liquidity and funding. In addition, a prolonged Covid-19 outbreak will cause non-performing loans to spike up, ” Affin Hwang said.

Under its revised assumptions for the banking sector for 2020, the brokerage projected system loans to decline 3%; net interest margin of 1.95%; net credit cost at 30 basis points (bps); and cost-income ratio at 52%.

The brokerage said the economic headwinds triggered by Covid-19 that would dent the banking industry’s loan growth and push up banks’ gross impaired loan (GIL) and loan-loss provisions.

In addition, it expected the 125bps cut in overnight policy rate would lower banks net profits by an estimated 10% for 2020-2021.

However, it reckoned the valuations of banks were reasonable.

In addition, the 2020 estimated dividend yield was attractive at 5.3%.

It has “add” calls on Public Bank (most defensive amid the rise in industry GIL), RHB (due to fee income boost from new bancatakaful partnership) and AMMB (attractive valuations with lowest PE of 6.4 times in the sector).

Affin Hwang, on the other hand, likes K-Desa Resources Bhd due to its attractive yield and resilient business in the auto-financing of mass-market used cars. 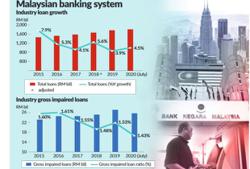 Banks gear up to face headwinds 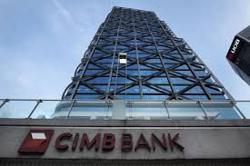