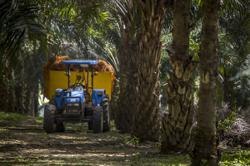 Datuk Shireen Ann Zaharah Muhiudeen has been removed from her position as Bursa Malaysia chairman by the Finance Minister over governance issues.

PETALING JAYA: Datuk Shireen Ann Zaharah Muhiudeen has been removed from her position as Bursa Malaysia chairman by the Finance Minister over governance issues.

rests with the Finance Minister, as provided for in the Capital Markets and Services Act 2007 (CMSA).

In exercising this power, it said, the Minister had consulted with the SC before arriving at his decision. “The consultation in this instance, revolved around governance issues and the current Bursa chairman’s fit and properness to continue holding the position.

“Following our consultation, we believe the Minister has decided to revoke Shireen’s appointment, ” the SC said.

It is not known who will be replacing her. Shireen, who was appointed Bursa chairman on March 1 last year, replacing Tan Sri Amirsham A. Aziz, is the founder of CorstonSmith Asset Management Sdn Bhd. She was previously the asset management company’s MD and Principal Fund Manager from 2007 to 2019.

More in StarBiz on Friday