JP Morgan: Most risks assets should trade higher in Q2

Stabilisation sign: A file picture showing a woman passing by a JPMorgan Chase bank in Times Square in New York City. Conditions that JPMorgan had set for market stabilisation and revival have largely been met. — Reuters

NEW YORK: Strategists at JPMorgan Chase & Co have concluded that most risk assets – a universe that typically includes stocks and credit – have seen their low points for the recession that’s gripped economies around the world.

Conditions that JPMorgan had set for market stabilisation and revival have largely been met, with recession-like pricing, a reversal in investor positioning and extraordinary fiscal stimulus, strategists led by John Normand wrote in a note Friday.

Coronavirus infection rates remain a “wild card, ” as they remain high even if they’re “slowing” in the United States and Europe.

“Risky markets should remain volatile as long as infection rates create uncertainty about the depth and duration of the Covid recession, but enough has changed fundamentally and technically to justify adding risk selectively, ” Normand wrote.

“Most risky markets have probably made their lows for this recession, except perhaps oil and some EM currencies beset by debt-sustainability issues.”

Most risk assets should trade higher in the second quarter of the year, Normand said. He recommends that investors average into oversold markets, particularly those where central banks are buying directly.

“The optimal time to re-enter cheap markets is either one quarter before the growth slump fades, for those who have high confidence in their business-cycle forecasts; or when valuations reach two-sigma extremes, for those who are agnostic on fundamental catalysts, ” Normand said.

Not everyone sees the bottom as necessarily in.

Goldman Sachs Group Inc’s David Kostin reiterated in a note Friday that he expects the market to turn lower in coming weeks.

He cited a checklist for a sustained rally similar to Normand’s – of slowing viral spread, evidence that fiscal and monetary policy stimulus is working, and a bottoming in investor positioning and flows.

Normand said his approach dovetails with the recommendations in the past week from bottom-up analysts at JPMorgan to add exposure in US and European credit, peripheral European sovereigns, and US and European inflation breakevens.

On the stocks side, things are somewhat more nuanced. JPMorgan has been overweight equities all year in its multi-asset portfolio, though partially hedged with short positions in credit and long ones in the US dollar.

“Thus, future adjustments would be in terms of magnitude and funding source rather than in overall tilt, ” Normand said.

He added that “our global equity strategists believe that the risk-reward for equities remains skewed to the downside” because relief rallies will be faded.

Normand cautions that not all apparently cheap markets should be bought, as there is still a risk-reward spectrum.

Developed-market bonds should be used to fund allocations to cheap credit and equities, but bond sell-offs should also be used as opportunities to buy duration as insurance against the next shock.

Credit generally has higher risk-adjusted returns than equities, so in volatility-adjusted terms may be superior in the market bottoming process over the coming weeks, he said.Emerging-market stocks and bonds warrant some exposure, Normand said.

Even if their countries’ fundamentals might not improve relative to those of developed nations, there’s potential for a “significant and broad decline” in the US dollar amid the United States’ twin fiscal and current-account deficits, which would benefit assets in developing countries. — Bloomberg 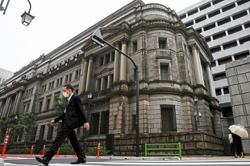