as both its Genting Malaysia and Singapore subsidiaries continue to show resiliency despite higher casino levies.

"We like Genting for its deep value proposition and as a cheaper proxy for Japanese casino play," it said.

However, the research house slashed FY20-21 earnings forecasts on the stock due to net profit revisions at Genting Singapore due to Covid-19 and Genting Plantations on lower FFB growth premium outlet and downstream contribution assumptions.

RHB kept its buy call on Genting with a lower target price of RM7.90 from RM8.60 previously.

To recap, FY19 core profit of RM2.37bil came within RHB's and consensus estimates. Ebitda was flattish year-on-year but core profit fell 14.4% due to higher depreciation, lower interest income and share of losses from Empire Resorts.

Across the Causeway, Genting Singapore posted a marginal 0.8% decline in Ebitda as the drop in mass gaming volumes from the increased casino levy was offset by a higher win rate.

Genting Malaysia recorded a 7.2% increase in revenue on better hold percentage in the VIP/Premium mass market, although the higher gaming tax brought Ebitda down 9.1%.

In the UK and Egypt, Ebitda rose 27% y-o-y on MFRS16 accounting adoption while the US and Bahamas operations were dragged mainly by an increase in operating expenses from Resorts World New York City operations.

There was lower net generation from the Banten power plant and adjusted Ebitda within the power segment while on the plantation side, weaker palm product prices wiped out the higher sales volumes from the downstream manufacturing unit, with Ebitda declining 1.4%.

The oil and gas unit experienced lower production levels despite the better oil prices on average. 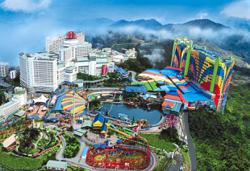