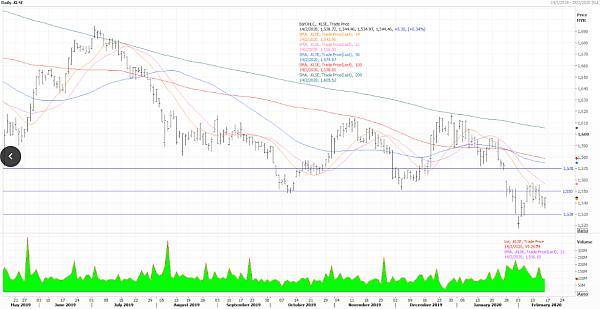 REVIEW: Volatility continued in markets as the Covid-19 coronavirus pandemic continued to spread, despite stimulus measures by Beijing to mitigate the negative impact on its economy.

In recent days, analysts have issued lowered forecasts on the Chinese economy for the first-half of 2020. JP Morgan analysts have predicted that in the event the outbreak does not peak in the first quarter of the year, China’s economy could show a contraction and undergo a rebound in subsequent quarters.

At its Monday open, Bursa Malaysia failed to maintain the previous week’s rebound and took a turn to the downside.

The FBM KLCI stopped short of breaching a crucial resistance level during the rally, leading to technical weakness and profit-taking as trading resumed. At market close, the index was down 11.69 points to 1,542.80.

Overnight, however, US markets were lifted on the strength of its tech shares, snapping a five-day losing streak as corporate earnings lent an optimistic outlook to the strength of the economy.

At Asia’s open, the People’s Bank of China injected 100 billion yuan (US$14.3bil) into the financial system via seven-day reverse repos to maintain liquidity in the banking system. The amount helped to mitigate the 380 billion yuan of reverse repos that were maturing that same day.

Taking in the positive news from the world’s two biggest markets, the FBM KLCI swung higher by 8.68 points to 1,551.48 on Tuesday.

There was some hope at mid-week that the coronavirus outbreak had peaked when China reported its lowest number of new infections in a day. This aided sentiment in global markets while oil futures recovered on renewed optimism and hopes of production cuts by Opec suppliers.

In Malaysia, however, bank stocks were roiled by news of a disappointing fourth-quarter GDP growth of 3.6% – the lowest in a decade – and an announcement by Bank Negara that there was room for more overnight policy rate cuts to accommodate challenges to the economy.

On fears of squeezed margins, banks fell between 1.4% and 2.5% on Wednesday, with losses led by PUBLIC BANK BHD

. The local benchmark index tumbled 8.54 points to 1,542.04, all but erasing the gains it had made in the previous session.

This weakness in the financial sector would hold the FBM KLCI in a downtrend for most of Friday. However, a late-day announcement by Prime Minister Tun Dr Mahathir Mohamad that a stimulus package would be unveiled on Feb 27 pushed the index 5.30 points up.

Outlook: The FBM KLCI was seen entering a consolidation phase, having failed to sustain the rebound that was building in the previous week. The index is trading closely to the descending 14-day simple moving average and looks headed for the support at 1,530. The outlook on the price chart is looking more bearish while weakness in the technical indicators are reflecting a lack of buying momentum.

However, as the slow-stochastic has entered oversold conditions, there is an opportunity for the decline to slow and an attempt to bounce higher from the support. Support levels are seen at 1,530 and 1,500 while resistance can be marked at 1,550 and 1,570.