Globally, countries have been racing to get wired. Strong data connections for the masses have long been seen as a means to boost economic activity in the digital age. Consider what is happening in India.

Mukesh Ambani, Asia’s richest man and owner of conglomerate Reliance Group, has announced a massive plan to offer cheap broadband access in a country which lags behind in other forms of traditional infrastructure.

His JioFiber offering, at prices as low as 700 rupees (RM40) per month for speeds of at least 100Mbps, is the first in the country and has made big headlines and got his competitors worried. He is also throwing in a free LED television to lure users.

Ambani’s move illustrates the fight for tech supremacy around the world. Digitalisation is changing the way people live, work and play, and players and countries that can reach massive scale with the speediest networks are expected to reap the most economic benefits.

In a report, Deloitte says: “The digital economy is the economic activity that results from billions of everyday online connections among people, businesses, devices, data and processes. The backbone of a digital economy is hyperconnectivity and is about the growing inter-connectedness of people, organisations and machines.’’

It is no surprise then that on our shores, Gobind Singh Deo, the Communications and Multimedia Minister, has set the stage for Malaysia’s attempt at this race.

This week, he got the Cabinet to agree to the massive RM21.6bil National Fiberisation & Connectivity Plan (NFCP), a plan he first announced a year ago. It is the largest capital expenditure infrastructure plan announced by this government.

“The five-year plan (2019-2023) is to spearhead the development of digital infrastructure and increase competitiveness, ’’ Gobind says.

Even though the Cabinet has approved the plan, telecoms players aren’t popping the champagne bottles just yet, as the details of how this massive project will be executed are yet to be revealed. Execution will be key to the plan’s success as is the willingness of the players to help the government.

All will be revealed soon enough, though. Prime Minister Tun Dr Mahathir Mohamad is expected to launch the NFCP on Sept 19 when more details will be shared. 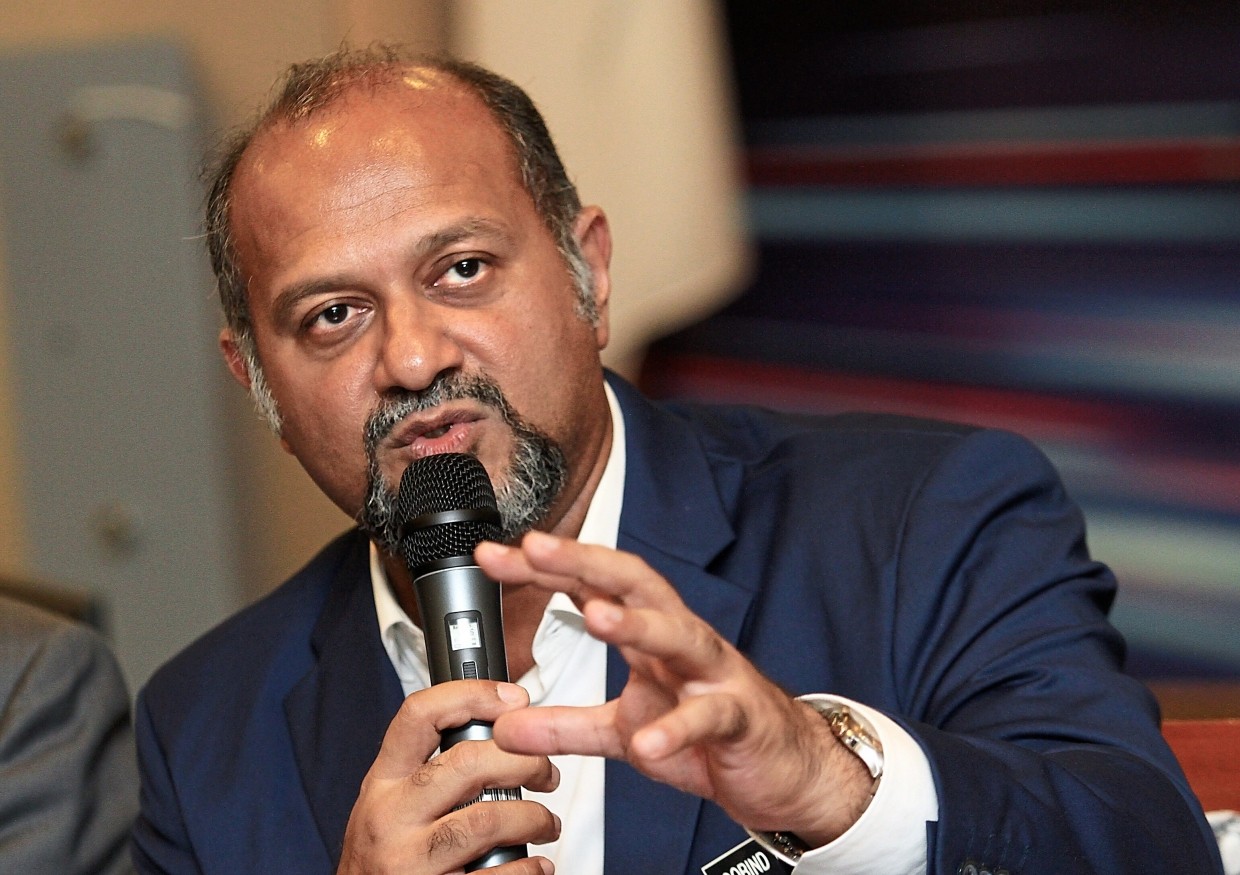 Gobind: The five-year plan is to spearhead the development of digital infrastructure and increase competitiveness.

(TNB) - the energy giant which is a new player in the telecoms scene which has been rolling out fibre connectivity on its power lines - said yesterday that it would expand fibre coverage to four more areas in Melaka after its initial move into Jasin.

The objective of the NFCP is to narrow the digital gap between rural and urban centres, and it will connect 98% of populated areas with average speeds of 30Mbps by 2023. It is also to prepare the country for the 5G onslaught.

The NFCP is also a major initiative to stimulate the economy.

Wider reach and faster Internet access will not just automate businesses but create new business models, new jobs and help the country get into the new buzzwords of “Industrial Revolution 4.0” and the Internet of Things (IoT).

Imagine someone living in a remote village in Sarawak who produces native art. Now with access to the Internet, he could begin to market his works to the world at large.

commander-in-chief Afzal Abdul Rahim shares the enthusiasm: “The multiplier effect arising from this on the digital economy will be huge for the country. We also cannot deny our rural citizens access to the Internet similar to what the urban folks are getting.”

There are 4.3 billion active Internet users globally, representing about 56% of the global population, and Asia makes up nearly half of the Internet population as per Statista’s data.

E-commerce sales worldwide amounted to US$2.8 trillion last year and Statista’s forecast is for e-retail revenues by 2021 to be US$4.88 trillion. Online shopping is the most popular form, but new areas are fast developing such as financial technology, online healthcare, online gaming and video streaming.

As at the first quarter of 2019, there were 2.7 million broadband customers and 38.8 million mobile subscribers in Malaysia.

The NFCP is a needs-based initiative as once the infrastructure is in place, it will help drive the digital economy. It is not that the country lacks fast broadband or mobile infrastructure, but it is now focused largely in major towns and cities.

The suburban areas are largely still dominated by copper infrastructure and the speed is still at a snail’s pace.

Even some pockets of the population in urban centres have no access to fast-speed broadband, let alone those in the semi-urban and rural areas.

This is simply because players do not see economic sense to offer fast-speed broadband, as the cost to roll out fibre is several times higher than urban centres, and the take-up rate is low.

This is why earlier, the government was a co-investor with TELEKOM MALAYSIA BHD

(TM) for the high-speed broadband (HSBB) network. However, the HSBB project had largely focused on major cities. Even the second phase of the HSBB did not reach the far-flung masses and this is why the NFCP has come into play.

But there have always been challenges in wiring up rural areas due to insufficient returns on investment.

An industry executive says the average revenue per user in urban centres is about RM120 to RM130 compared with RM70-RM80 in sub-urban areas.

“If you link fibre in an urban centre, the take-up rate is normally over 50%. However, in a semi-urban area, you will be lucky to get 30% and that is why players are reluctant to sink money in areas out of the mainstream, ’’ says an industry executive.

The country has over seven million households. Of these, only 2.5 million landed homes and 1.3 million high-rise apartments have HSBB.

About 3.5 million homes will need to be connected under the NFCP. This includes the 2.5 million homes in semi-urban areas such as Sekinchan, Teluk Intan, Sitiawan and many others, and about one million in rural areas, including those in Sabah and Sarawak. Under the NFCP, fibre needs to pass 70% of schools, hospitals, libraries, police stations and post offices by 2022. The government is looking at 700,000 homes to be connected with fast broadband in a year under the NFCP compared to 450,000 for HSBB.

“But the NFCP is a lot about newer areas and the players should be willing to invest, ’’ says an executive.

Many homes in Sabah and Sarawak will benefit from the NFCP, as these two states are lagging behind in fast-speed broadband infrastructure beyond its major cities and towns, experts believe.

The funding for the NFCP cannot be borne by the government or industry alone.

It is just too huge an amount with no guaranteed returns.

This is why the government is going to source funding from the Universal Service Provision (USP) fund to fuel the infrastructure development.

The USP was created years ago, by getting licensed telecoms operators to contribute 6% of their weighted net revenue that exceeds the RM2mil threshold in order to fund infrastructure to rural areas. The fund size stands at RM8bil, although some amounts have been committed. About a RM1.5bil to RM2bil contribution is added on every year.

It should be noted that some of the USP funds have been used for other things, including buying computers, attracting criticism in the past.

“Finally, the government is listening to the players to use the USP fund. It will help as the fund size is huge and it can fund at least half the total requirement of the rollouts, ’’ says an industry executive.

Executives in the know reckon that about 50%-60% of the entire NFCP will be funded via the USP fund, with the rest by the players and other sources. In the last budget, the government said it would execute the NFCP with a RM1bil allocation.

“To wire up the 2.5 million homes in the semi-urban centres, it will easily cost about RM10bil to RM12bil, ’’ an industry executive says.Of this, the raw fibre cost will be about RM1bil, with the remaining being construction and equipment cost.

Large telco operators in Malaysia currently invest between RM800mil and RM1bil in capital expenditure each year. With the NFCP, these operators are likely going to have to spend more to help the government achieve its objectives.

One of the biggest challenges players have been facing over the years when rolling out infrastructure in states is the tedious and costly approval process at local municipalities and state agencies.

With the NFCP, the government will assist in spectrum re-farming and distribution. Both Gobind and Malaysian Communications and Multimedia Commission chairman Al-Ishsal Ishak have been going around meeting state agencies to get their buy-in for a smoother rollout.

Players also want the regulator to consider dishing out the 2x45MHz instead of the 2x40MHz spectrum once the analogue switch-off is completed. At some point, the 5G spectrum will also be tendered out.

Gobind jolted the industry last year by bringing down the wholesale access pricing by implementing the Mandatory Standard Access Pricing. This led to lower retail broadband prices and also to broadband prices falling by an average of 49%, with entry-level prices for 30Mbps dropping to RM79/month from RM139/month. Prices have since dropped to about RM69/month.

The lowering of rates has affected some telco earnings.

“All players are not investing enough in fibre in recent times. The government has to be very clear on the concept of co-sharing with the NFCP, in terms of the returns that telcos can achieve from their investment, ’’ says an executive.

One suggestion is that all the areas under the NFCP be zoned and categorised according to urban, semi-urban and rural areas, and lucrative and non-lucrative areas.

“Tell the players that if they get one urban or semi-urban area, then they also have to roll out services in one or two remote areas. The income from the urban and semi-urban areas will help offset that of the rural areas, ’’ he adds.

“This will be a fair way to make everyone invest and also share infrastructure without burdening any party. It is also time the players do more national service instead of focusing on the main core areas, ’’ says the executive.Amid all this, TM has its own RM5bil plan to offer wireless access to the country in its bid to become a serious player in the mobile-wireless area. How this will pan out in light of the NFCP is unclear.

At the end of the day, it is fast Internet access that people need, and as Gobind put it, “access to the Internet is a necessity, not a privilege or a luxury, but a tool for survival”.