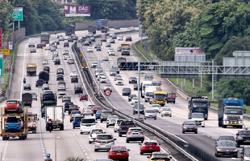 New look: An Illustration of how the PLUS rest areas will look like in the future.

At PLUS Expressways Bhd’s headquarters at the Subang interchange, the company’s traffic-monitoring centre staff keep a round-the-clock watch on the traffic condition on its highways.

These traffic controllers are supported by live feeds coming in from traffic cameras located at hot spot areas, as well as information from patrol teams on the ground.

These dedicated staff have done a tremendous job in ensuring the safety and comfort of highway users, especially during peak travelling periods.

To help them do their job better, managing director Datuk Azman Ismail says the company is bringing in the help of intelligence.

“The management is powering change by using technology and digitalisation to disrupt barriers that once stood in the way of doing things better in PLUS,” he says.

Last month, the company signed a partnership agreement with Microsoft Malaysia to integrate the technology giant’s Azure cloud system into its toll-collection operations.

Azman says the use of new technology such as artificial intelligence (AI) and big data analytics would give the company the ability to better predict traffic congestion and monitor the safety of its highways.

The partnership, he says, signifies the group’s first step in its digital transformation, with the aim of driving efficiency and lowering the operating cost on its highway network.

“PLUS is leveraging on data science through information consolidation across toll, video and other data points that will utilise predictive modelling and machine learning to tackle future traffic conditions,” he adds.

To facilitate this technology-driven change, the existing highway surveillance camera system will be outfitted with new intelligence features such as pre-emptive alerts.

These investments in new technology, Azman says, will also drive growth in its non-toll business segment.

PLUS generates around RM4bil in annual revenue, but traffic growth has slowed down to less than 2% a year.

With the West Coast Expressway coming up, PLUS’ own projection shows a 5% reduction in traffic volume on its North-South Expressway (NSE) due to the competition, and the impact from rail transportation such as the ETS, LRT and MRT that run parallel to PLUS’ own highways.

“The new infrastructure development will definitely have some impact on the traffic trend,” Azman says.

As it is, toll collection contributes around 95% of annual revenue. Azman says the potential is there for the company to grow non-toll revenue over the next few years, which is 5% of revenue now. The ambition is to double that.

With more than 25,000 daily foot traffic at its rest and service areas (RSAs), as well as over 1.7 million toll-payment transactions each day, the toll concessionaire is turning to technology to harvest this huge data goldmine.

“We need to know more about our customers to service them better,” Azman says.

The most visible generators of PLUS’ non-toll revenue are the 29 RSAs it operates, 24 along the NSE, as well as four overhead bridge restaurants and 50 laybys.

Twenty-four of these RSAs are on the NSE. About 85% of the businesses at the RSAs are from the local community.

Azman says plans are already underway to upgrade five of these existing stops into the new model RSA. The first one being rebuilt will be the Southbound Seremban RSA. The cost of rebuilding the RSA into the modern facilities is RM50mil and will take a year to construct.

The remaining four RSAs - Machap, Tapah, Bukit Gantang and Juru - will be upgraded in stages.

Azman: We don’t pay too much for maintenance