is investing about RM30mil in a warehouse in Sarawak.

Group managing director Datin Tan Pak Say told StarBiz after an AGM that the facility would place the group in a competitive edge to serve the growing Sarawak market in the years to come.

The RM30mil will include the cost of land, building and equipment.

“We are working towards the second half of 2020 for the warehouse to be ready for operations.

“The facility will be used for storing hot-rolled deformed bars and to provide downstream services,” she added.

According to Tan, up to 70% of the approximate 10 million tonnes of steel used in Malaysia is consumed by the construction sector every year.

“A slowdown in construction demand similarly would impact the steel manufacturers, Leader Steel among them.

“However, we expect the slowdown to be temporary and the turnaround would come when Malaysia’s construction projects worth RM350bil gradually come on stream over the next two to three years.

“Furthermore, Leader Steel is exploring opportunities in the steel-related manufacturing sectors and the export market.

“We trust this strategic move would reduce risks of operating largely in a single market,” she added.

On the 2019 outlook, Leader Steel said it is bracing for the possibility of raw material shortage and subsequent increases in raw material input cost for its steel product segment in the short term.

Between late-2018 and early-2019, the slowdown in local demand and high raw material input cost impacted profit margins. “The price of iron ore increased drastically following speculation of a supply shortage, resulting from Vale’s Brazilian mine accident and subsequent closure in January 2019.

“Several mining players including Rio Tinto, BHP and Fortescue have expressed that they have no additional capacity to meet the gap left by Vale’s mine closure.

The Asean region is expected to maintain a steady growth rate in steel consumption of around 5% to 6% per year in the short term, according to Tan.

“In 2019, steel consumption in the region is projected to exceed 80 million tonnes.

“The key driver of consumption growth is the development of infrastructure projects in Vietnam, the Philippines and Indonesia,” she said.

Currently, 65% of Asean’s steel demand is met through import, and steel manufacturers in the region are investing in bigger capacities to meet the growing demand.

“Malaysia, from 2007 to 2017, lost 60% of its market share in crude steel production to other Asean countries.

“Most notably, Malaysia’s flat product segment is falling significantly in the absence of strong local players.

“Malaysia’s steel industry can support and contribute to Malaysia’s vision of being a developed nation by 2025 in a self-sustainable manner,” Tan said.

“Barring any external shocks such as a global slowdown and given that demand for steel products continue to maintain stable growth, profit margins should improve.

“Our trading and processing of minerals segment is expected to continue its measured growth,” the report said.

Leader Steel swung into a net loss position of RM1.87mil, or 1.48 sen per share, for the first quarter of 2019 from a net profit of RM2.23mil, or 1.75 sen per share, in the corresponding quarter last year, weighed down by lower profit margins in the manufacturing segment.

The company said the improvement in performance was mainly due to the increase in revenue from the trading of minerals segment, which recorded an increase of RM7.95mil, or 92.7%, from RM8.58mil to RM16.53mil.

This was due to lower selling prices. 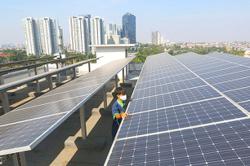