The works have started in the stretch between Dungun and Mentakab.

Malaysian contractors are expected to benefit from the civil works that will be given out in the next few months with 40% of the contracts going to local companies.

“Tunnel works are excluded from the 40% civil works allocated for local contractors. All tunnel works are to be done by China companies or the main contractor which is CCCC (China Communications Construction Company Ltd), “ said a source.

Sources also said that works in another two sections of the ECRL will start next year.

The project is broken into three sections. They are the stretches from Kota Baru to Dungun, Dungun to Mentakab and from Mentakab to Port Klang.

The Port Klang to Mentakab portion is a completely new alignment and would require time before work starts, said sources.

“It was discovered that the soil conditions on the Kelantan to Terengganu route from the planned Kota Baru to Dungun stations were too soft,” the source said.

The route along the east coast of Peninsular Malaysia may be adjusted inwards due to soft soil conditions at certain locations, the source added.

“This portion of the ECRL will start early next year when the new design and alignment are formed up,” the source said.

It was announced early last month that the ECRL had resumed with a substantial cut to its price tag of around 34% from RM65.5bil to RM44bil.

According to the route map which is available on the Malaysia Rail Link (MRL) website, the ECRL will now have 20 stations stretching from Kota Bharu to Port Klang.

The ECRL will also make a stop in Negeri Sembilan but this station has not been named nor specified yet at press time while there are four stations being planned for Selangor, that is in Bangi/Kajang, Putrajaya Sentral and Port Klang.

Another station in Selangor that is supposed to be located between Putrajaya Sentral and Port Klang has not yet been named nor specified, according to the MRL route map.

The old route that was initially planned was more tunnel-intensive, this being the Gombak-Bentong-Mentakab portion. This has been scrapped in favour of this new alignment in an effort to reduce costs.

In light of this new development, analysts said construction stocks are well placed to weather the storm that is currently enveloping the markets due to the trade war between the US and China.

The Bursa Malaysia Construction Index which tracks the general prices and trend of construction stocks listed on the Malaysian stock market had experienced some profit taking from end-April to last Friday, having fallen by some 12.24%.

Profit taking was evident for about two weeks following the major ECRL announcement and the US-China trade war had worsened in recent days.

However, the Bursa Malaysia Construction Index still outperforms the FBM KLCI in the year-to-date period as FBM KLCI is in negative territory with a loss of 5.17% while the construction index had posted a gain of 24.31%. 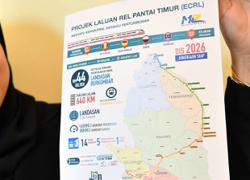