The benchmark palm oil contract for October delivery on the Bursa Malaysia Derivatives Exchange was up 1.25% at 2,028 ringgit ($492.59) per tonne at the close of trade in its third straight session of gains. Earlier in the session, it rose as much as 1.3% to 2,030 ringgit, its strongest levels since June 21.

JAKARTA (Reuters) - A global palm oil industry watchdog is planning a separate standard for smallholders to help them adopt sustainable practices and get green certification, the Indonesian director of the Roundtable on Sustainable Palm Oil (RSPO) said.

Indonesia is the world's biggest palm oil producer and smallholders account for roughly 40% of the country's 14 million hectares of palm plantations, and are often blamed for practices such as burning to clear land, causing forest fires.

The European Commission earlier this year determined that palm oil has resulted in excessive deforestation and it should no longer be considered a renewable transport fuel, albeit with some exemptions, a decision that angered the Indonesian government.

Independent Indonesian farmers, with land no larger than 25 hectares, will have to meet environmental and social sustainability standards, but some requirements will be adjusted soon, RSPO Indonesia director Tiur Rumondang said in an interview this week.

Getting farmers to obtain sustainable certification would encourage them to comply with good agricultural practices and reduce the risk of forests being converted or damaged, she said.

"Imagine if this 40% is not looked after, this is potentially a massive land conversion if we don't manage it."

Small Indonesian farmers generally suffer low productivity due to the use of poor quality palm seeds and substandard farming practices.

Details of the new smallholder standards are still being discussed, Rumondang said, but among requirements that will be changed are those related to labour, since farmers managing only a few hectares of land generally get help from family members.

These farmers would still have to comply with rules such as when teenaged family members work, they should not do so during school time and only for a certain amount of time per day.

The RSPO will also allow farmers to enjoy the benefits of certification in stages so that, for example, they can start to get RSPO benefits as soon as they confirm the legality of their land ownership.

Access to the RSPO credits would help farmers to finance further audits needed for the certification, Rumondang said.

Proving land is legally owned or farmers have the right to use land had been among the main hurdles for Indonesian farmers wanting to join the replanting programme, farmers have said.

Bambang Gianto, a farmer in South Sumatra, whose plantation has been certified by RSPO, said the process had been quite costly, including improving farming methods and fertilizer use.

"Costs at the beginning were pretty big," Gianto said.

In addition, he said getting certified did not guarantee better pricing for palm fruits, but the improved methods made his output jump by up to 20%. 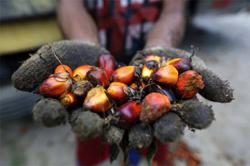