The index for food and non-alcoholic beverages for the country rose 0.7% in December from a year ago.

KUALA LUMPUR: Kuala Lumpur recorded the highest inflation rate among the other states in the country in March at 0.9% from a year ago, compared with the national average of 0.2%.

The Statistics Department said on Wednesday the higher inflation recorded in Kuala Lumpur was due to a 4.2% increase in  food and non-alcoholic beverages index.

These states' inflation rate surpassed the national consumer price index (CPI) rate of 0.2% in March from a year ago, it said.  However, the 0.2% increase was below a Bloomberg survey of a 0.3% rise.

Chief Statistician Datuk Seri Dr Mohd Uzir Mahidin said the increase in the overall index was due to a 2% rise in the index of housing, water, electricity, gas & other Fuels (+2%), education (+1.3%), food & non-alcoholic beverages (+1.1%) and restaurant & hotels (+1%).

“On monthly basis, CPI increased by 0.2% as compared to February 2019. It was mainly supported by the index of transport (+2.6%), miscellaneous goods and services (+0.4%) and furnishing, household equipment & routine household maintenance (+0.3%),” he said.

In the first quarter, the CPI fell by 0.3% from the previous corresponding period due to the decline in the transport index, clothing and footwear and goods and services. 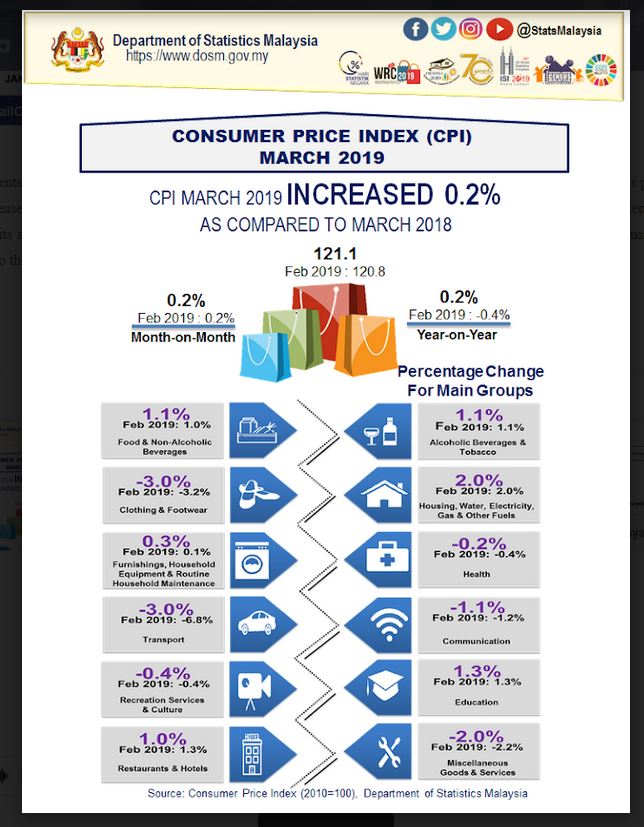 MIDF Research said looking ahead, Malaysia’s consumer inflation was likely to stay low following the lower capped prices of RON95 and diesel at RM2.08 and RM2.18 per litre respectively.

Commenting on the CPI data, it noted that food and non-alcoholic beverages inflation, which account for 29.5% of the CPI weights, increased by 1.1% on-year in March after maintaining at 1%on-year for two consecutive months.

Among others, prices for fresh seafood and fruits contributed to the increase. Besides that, prices of food away from home rose firmly by 3.4% on-year during the month.

“Going forward, we expect food component to be the key driver of overall inflation in 2019 driven by low-base effects on top of continued spill over effects from the Sales and Service Tax.

“In addition, being a net importer of food, Malaysia is also exposed to imported inflation due to ringgit depreciation hence initiating food inflation to stay at the high-side.

“Fuel-related items posted double digit deflation. The average price of Brent crude oil went up to US$66.70 per barrel in March from US$64.6 in the previous month. However, it contracted by -1% on-year,” it said.

Domestically, retail fuel prices for RON95 recorded negative growth of -5.4% on-year while those of RON97 rebounded to a positive growth of 6.5% during the month.

In tandem, prices of fuels and lubricants contracted by a single digit of -4.8% on-year in March 2019 compared to a double digit negative growth in February.

“Looking ahead, average Brent oil price for the first three weeks of April registered higher at US$71.3 amid removal of waivers for Iranian crude purchases,” it said.