With the global economy heading towards a synchronised slowdown and global foreign direct investments hitting the lowest levels in 10 years, it is becoming increasingly challenging to attract investments.

Hence, it is crucial for Malaysia to step up its game in positioning itself as a high potential investment hub in Asia. The government understands this very well and it has assured that adequate efforts are being undertaken to raise investors’ confidence in Malaysia.

It seems that the efforts have begun to bear fruit.

In 2018, a total of 81 capital intensive projects with investments of RM100mil or more were approved by the government, based on the recent data by the Malaysian Investment Development Authority (Mida).

In comparison to 2017, the number of capital intensive projects have improved substantially by over 43% year-on-year. 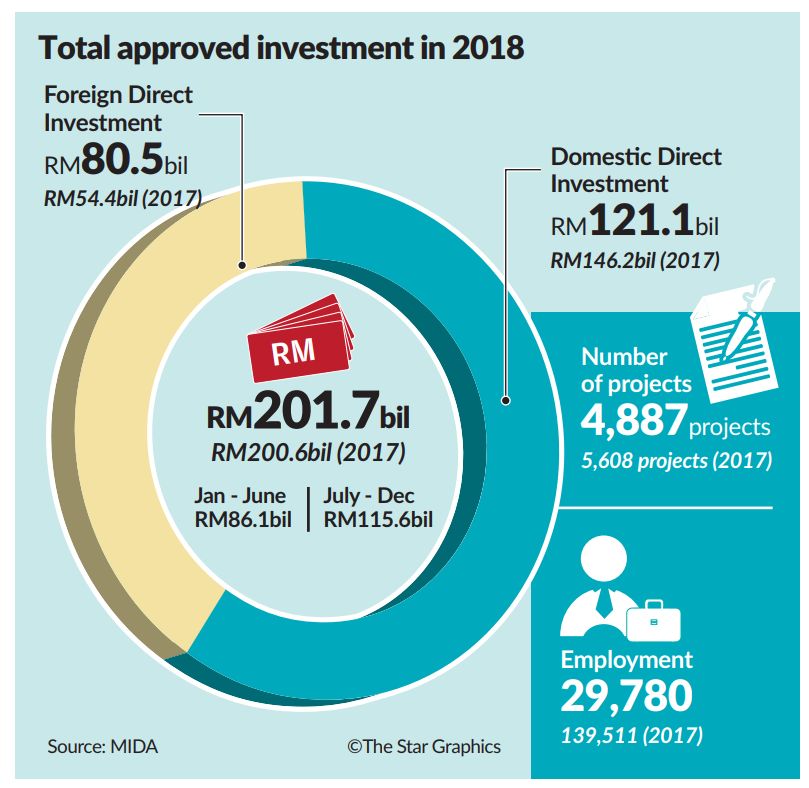 International Trade and Industry Minister Datuk Darell Leiking says that approved foreign direct investment (FDI) in the manufacturing sector last year more than doubled to RM58bil, up from only RM21.6bil in 2017.

“This reflects the country’s success in its targeted approach in attracting quality investments.

“The majority or 69.5% of FDI were in new projects, with the remaining being expansion and diversification projects.

“This shows that in addition to existing foreign companies expanding or diversifying in the country, more international investors are choosing Malaysia as their preferred investment destination,” says Leiking at Mida’s 2019 annual media conference.

This is the highest approved FDI figures recorded in the Malaysian history.

In order to maintain the commendable FDI momentum, particularly in the advanced technology-based industries, the Industry 4.0 agenda should be the country’s key mantra moving forward.

Industry 4.0 is the term used to describe the current trend of automation, Big Data technology, robotics and analytics in manufacturing technologies.

In view of the pressing need to push for the adoption of Industry 4.0 nationwide, Malaysia witnessed a significant milestone in the country’s automation journey last year, with the launch of Industry4WRD - the national policy on Industry 4.0. The policy, which sets Malaysia’s vision for the manufacturing sector for the next 10 years, is expected to drive digital transformation of the country’s manufacturing and related services sectors.

“The Industry4WRD is a pivotal step as Malaysia seeks to strengthen its on-going structural reforms to become a developed nation that is equitable, sustainable and inclusive by 2025 or even earlier,” according to a statement issued by the International Trade and Industry Ministry.

Investors and companies are encouraged to move up the value chain and embrace advanced technology-driven innovations. Earlier in March 2019, Finance Minister Lim Guan Eng launched the RM3bil Industry Digitalisation Transformation Fund, which offers companies an interest subsidy of 2% annually on the financing taken to upgrade their production technology.

The fund, which was first announced in Budget 2019, will be managed by Bank Pembangunan Malaysia Bhd.

Moving forward, the challenges in attracting investments are not only centred on the FDIs.

The government must also address the causes behind the continued contraction in domestic direct investments (DDI).

For context, the country’s DDI continued to fall for the fourth consecutive year in 2018, across the manufacturing, services and primary sectors.

Mida, on its part, has recently set-up a dedicated team, namely the Investment Coordination Platform (ICP) to assist local companies, particularly the small and medium enterprises, by bridging or narrowing their financial and technology gaps.

The unit works closely with equity and corporate advisory firms as well as local regulators and technology providers in assisting companies to conduct business-to-business matching, capital raising exercise through debt and equity, merger and acquisitions, divestment and initial public offering (IPO) exercises. Mida chief executive officer Datuk Azman Mahmud has said that the ICP team has engaged with over 160 manufacturing, services, and plantation companies and 50 strategic technology and funding partners.

“As of to date, 40 business-to-business meeting sessions have been conducted between anchor companies and their respective local counterparts to discuss strategic collaborations. Notably, the team’s IPO services have enabled a local steel company to meet the requirements for listing on the ACE Market of Bursa Malaysia,” said Azman.

The pursuit for investments is a never-ending affair, as the country’s charts its long term growth into becoming a high income nation. The bigger question is, what are the government’s strategies to convince investors that Malaysia is the best destination for investments compared to other emerging and advanced economies?