"A solid bearish build to crude inventories has been offset by some chunky draws to the products," said Matthew Smith, director of commodity research at ClipperData.

Crude futures also tracked a slump in U.S. equities, which sputtered without positive developments in trade talks between Washington and Beijing. [.N]

"Selling in equities played a significant part in today’s oil price weakness," Jim Ritterbusch, president of Ritterbusch and Associates, said in a note. "Further reduction in risk appetite and any additional downgrades in the global economic growth path could eventually weigh across the energy spectrum."

The markets have been hit by surging U.S. crude production, which, according to the EIA, held at an all-time high of 12.1 million barrels per day last week.

The rise in North American production undermines supply cuts led by the Organization of the Petroleum Exporting Countries and its non-member allies, including Russia, that has helped crude prices rise about 20 percent this year.

OPEC and its partners have pledged to curb output by 1.2 million bpd, and they are likely to push back their decision whether to extend the production agreement to June from April, sources said. 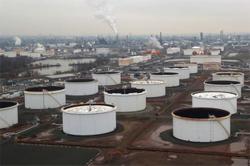