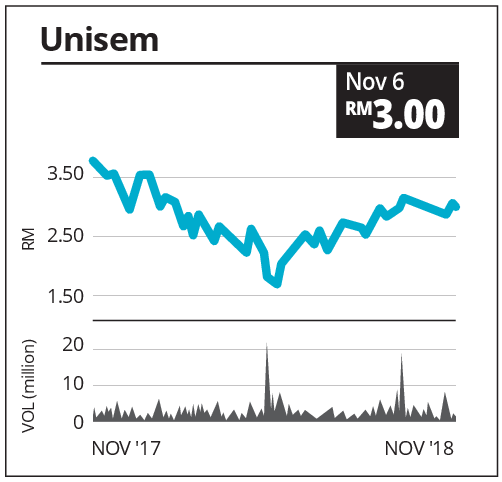 AMINVESTMENT Bank Research is maintaining its “accept offer” recommendation on Unisem at the offer price of RM3.30 per share, which represents a 32% upside from its fair value of RM2.50 per share.

The research house said its valuation is pegged to a 2019 price-to-earnings ratio of 14 times.

“We keep our earnings projections unchanged,” it said.

The research house said it came away from Unisem’s third quarter 2018 briefing, learning that its fourth quarter earnings will not see any surprise as the management guided a flat quarter-on-quarter growth.

“With concerns surrounding the US-China trade war with regard to technology dispute and a less favourable global market condition, several of its customer relating to power chips and Internet of Things players are carrying out inventory adjustments by holding off from placing orders until the very last possible minute.

“Our earnings forecast has taken into account the flat growth in the fourth quarter.”

In terms of product breakdown (in dollar terms), AmInvestment Bank said the consumer and automotive segment continued to experience growth, recording a climb of 3% and 2% respectively due to increased complexity in semiconductor content.

It added that the PC and communication segment saw marginal decline of 4% and 2% respectively, owing to tapering demand.

Moving into the fourth quarter, AmInvestment Bank said Unisem expects the automotive segment to continue growing, albeit at a gradual pace.

“This would translate into more fan-out wafer-level packaging jobs for several new products. The group is also expected to ramp up the production of MEMS microphones used for voice recognition.

“With the new dual-capability (8-inch and 12-inch) bumping facility in Ipoh completed, it is expected to increase Unisem’s bumping capacity from circa 20,000 wafers per month to 27,000 wafers per month, and potentially raise average selling prices given 12-inch wafers command two-times the pricing of eight-inch wafers.” 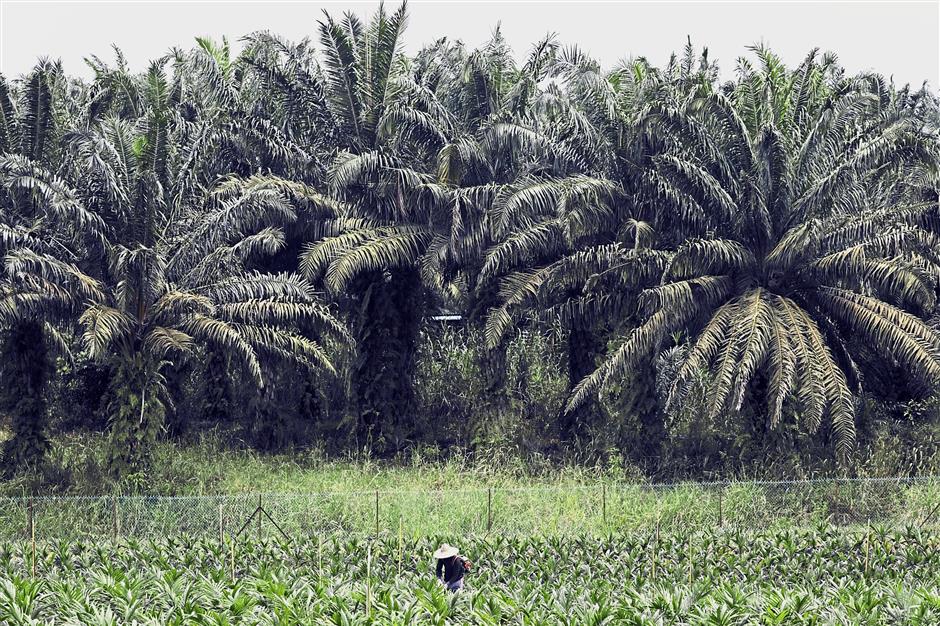 Non-event: A worker in a seedling plot at the Malaysian Palm Oil Board research plantation in Kluang, Johor recently. Budget 2019 is deemed a non-event for the plantation sector, according to Kenanga Research. — Bloomberg

Budget 2019 was a non-event for the plantation sector. Kenanga Research said the sector could have seen some relevant proposals.

These include an increase of minimum wage by RM50 to RM1,100 per month nationwide, effective January 2019; a reduction in the extension levy for foreign workers in the plantation industry who have served for over 10 years, from RM10,000 to RM3,500 per worker per year; implementation of biodiesel B10 programme for the transportation sector and B7 for the industrial sector in 2019; and an allocation of RM30mil to help smallholders obtain the Malaysian Sustainable Palm Oil (MSPO) certification.

“Both the increase in minimum wage and reduction in the extension levy per se have a minimal financial impact on planters under our coverage as many are already paying above the minimum wage levels, and the effects are countervailing.

“The implementation of B10 programme is expected to boost crude palm oil (CPO) consumption by an additional 150,000 to 200,000 tonnes, which is insignificant compared with our local annual CPO production of 20 million but is, nonetheless, encouraging.”

Kenanga Research also said the allocation of RM30mil for smallholders’ MSPO certification is expected to increase the availability of sustainable fresh fruit bunches supply for plantation companies with oil mills.

“Overall, we deem Budget 2019 a non-event for the plantation sector as it has a minimal financial/operational impact on planters under our coverage.”

“The revision is necessary as our earlier-expected CPO prices recovery in the second half of 2018 have yet to take place thus far.

To achieve an average of RM2,400 per tonne for 2018, CPO price has to recover above RM2,800 per tonne level for the remaining two months, which we think is nearly impossible.” 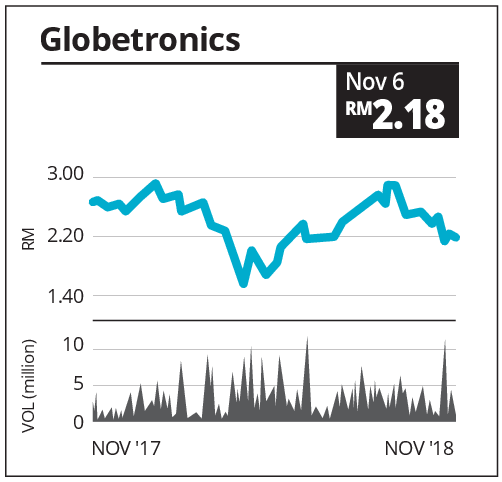 GLOBETRONICS is developing a number of new products, some of which could be rerating catalysts.

The more certain new products for 2019 would be the new generation of light and gesture sensors, which could have enhanced functionality and drive additional sales volume, apart from replacement demand.

UOBKayHian said the growth drivers of the demand for gesture sensors could be its end-client’s launch of new wireless earphone in 2019 and the strategy of bundling existing wireless headphones with 2019 smartphone models.

“Meanwhile, the growth driver of light sensors still largely relies on whether there will be more smartphone models that feature two light sensors per smartphone, given its end-client’s relatively flat smartphone sales.”

Beyond the existing products, the research house said Globetronics is working on three other sensor-related products.

“First, Globetronics is developing a hybrid imaging sensor (for camera applications) with its sensor client. This sensor is for its US smartphone end-client. Commercialisation of this sensor is still unclear (either 2019 or 2020) but it could be a key catalyst.

“Second, Globetronics is producing a small volume of imaging sensors with its end-client, a Chinese Android phone maker.”

UOBKayHian said Globetronics expects monthly production volume to increase to 500,000 to one million in the second half of 2019 from 50,000 units currently, adding however that this is unlikely to be a gamechanger.

“Third, Globetronics is working with a potential new EU customer on environmental and bio sensors. If this were to materialise, it would allow Globetronics to diversify its customer base; initial capital expenditure is estimated at RM20mil.” 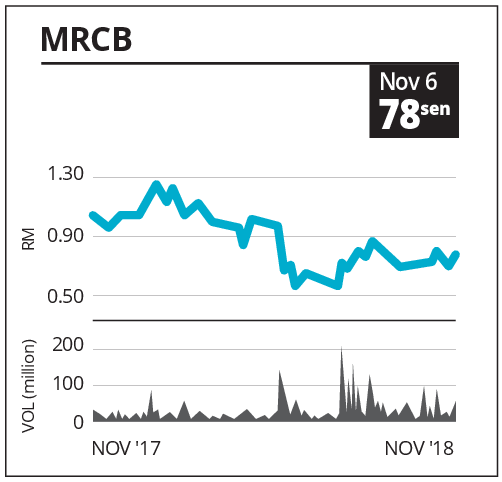 “One of the key infra takeaways relating to tolled highway concessions is the setting aside of RM1.3bil as full compensation to MRCB for the abolishment of toll collection on the 100%-owned Eastern Dispersal Link (EDL, 8.1km, 34-year concession) and the termination of EDL’s concession agreement (CA).

The research house said this news is positive and is long overdue, particularly clarity on the full settlement sum, which has never been officially revealed.

“The new government’s acknowledgement of the RM1.3bil compensation to MRCB, in our view, should revive the long-drawn-out negotiations on EDL’s mutual termination agreement (MTA), which commenced 10 months ago in January.

“With this new milestone, we believe there is a fair chance that a final resolution / agreement on the EDL could be expedited and reached by end-2018.”

“It was stated that in the event of a compensation arising from the MTA, MRCB expects, at the minimum, to fully recover the RM1.1bil carrying amount as per its legal rights under the CA, which was signed on June 26, 2007.

The research house is making no changes to MRCB’s 2018 to 2020 earnings per share forecast, pending the actual announcement by the government and MRCB regarding the resolution of the EDL MTA and more clarity on the timeline and the payment scheme of the settlement sum.

“Upgrade from ‘reduce’ to ‘add’ with a higher target price of 90 sen, pegged to a lower 20% discount to revised net asset value (30% previously). Our call is more trading-oriented ahead of official newsflow on the EDL, which will serve as the stock’s key catalysts. A key risk to our call is a delay in the EDL settlement.” 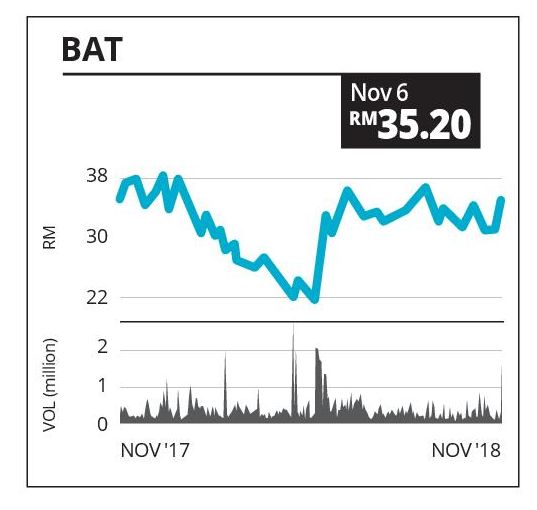 The government’s desire to recover at least RM1bil in tax leakages is a strong statement of intent, according to Affin Hwang Capital. It said that this would imply 2.5 billion cigarette sticks or 15 percentage points recoup in legal market share from year-to-date illicit market share of 63%.

“While we had earlier anticipated a proclamation of action against the illicit trade as well as a rain-check on raising excise duties this year, we conservatively assumed an eight percentage points legal market share gain in 2019 in our forecasts.

“The ban on smoking at outdoor eateries was also formally announced during the Budget speech starting Jan 1, 2019, of which we are largely neutral towards while awaiting further details on its implementation process.”

“We earlier mentioned that the price hike, at such levels, would be able to protect margins without causing a shock to volume sales, in our view. The quantum of price hike for the other tobacco players should also be revealed soon.”

The research house said it is maintaining a buy call on BAT.

“We tweak 2018 to 2020 earnings per share higher by 0.5%, 3.1% and 3.1% respectively after pricing in gross margin improvement from the price hike. The set of news should act as a re-rating catalyst for the stock, which remains largely below its fair value, while offering attractive yields of 4.4% to 6.3%.