"Malaysia biodiesel exports last year were pretty good ... It had a window to export to the EU, but now Malaysia is not competitive," said U.R. Unnithan, president of the Malaysia Biodiesel Association (MBA).

KUALA LUMPUR: Malaysian biodiesel production is likely to hit record levels this year and next, with 2018 exports on track to double from 2017, pushed up as higher oil prices boost the appeal of biofuels, the head of an industry association said on Wednesday.

The Southeast Asian nation is the world’s No.2 producer of palm oil, which can be used as feedstock to make the bio components of biodiesel.

“These would be record high (output and export) levels for Malaysia,” he said.

The country said in July that it would raise its so-called biodiesel mandate next year to 10 percent from the current 7 percent. The mandate refers to the percentage of bio-content that must be contained in biodiesel.

If the government goes through with that plan and crude prices hold, Malaysia could produce up to 1.2 million tonnes of biodiesel in 2019, said Unnithan.

Diesel’s premium over palm oil has widened in recent months amid stronger crude prices and weaker palm markets. Its spread over palm hit $219 per tonne in early October, its widest in four years, and was around $178 on Wednesday.

Unnithan’s latest outlook marks an upward revision to estimates he made in April, when he said Malaysian biodiesel production could decline to 500,000 tonnes in the face of competitive shipments from Indonesia. Diesel’s spread over palm was about $20 a tonne at that time. - Reuters
Article type: metered
User Type: anonymous web
User Status:
Campaign ID: 18
Cxense type: free
User access status: 3
Commodities 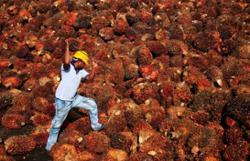