Tan Sri Tony Fernandes, in his latest Twitter post, said the airport regulator and operator should have supported the stakeholders -- both the airlines and passengers -- with fair treatment.

’s consolidation initiative, known as One AirAsia, that unifies its various regional affiliates under one holding company, provides the Group cost-efficiency whilst taking out the complexity and duplication in its operations.

In his latest post on Twitter, Group Chief Executive Officer Tan Sri Tony Fernandes said the current oil price that is shrinking and behaving so rationally is paving a smooth journey for the budget airline to fly higher.

Our One AirAsia initiative will take out lots of costs , complexity and duplication . High oil makes it easier to change.

“(Oil price) makes it easier (for AirAsia) to change. Great opportunity for us as we build market share,” he said, adding the data and digitalisation are beginning to show momentum in driving revenue and cutting costs.

AirAsia Group, encompassing the Malaysia, Indonesia and Philippines units, posted a higher revenue of RM2.56 billion during the first quarter ended March 31, 2018, up 15 per cent year-on-year from RM2.23 billion in the same quarter in 2017.

Revenue growth was supported by a very strong load factor of 87 per cent and a 16 per cent increase in passengers carried to 10.65 million pax as compared to the same quarter last year. 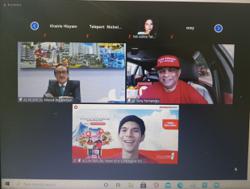