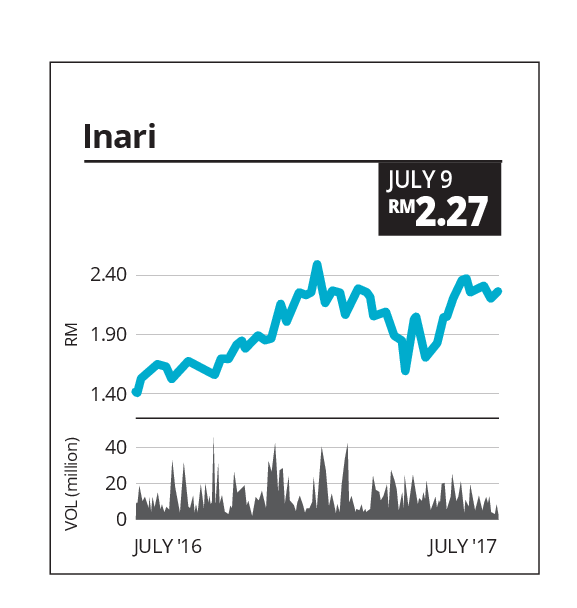 “Investors were interested to learn about the group’s growth prospects following its plan to raise the total floor area by nearly 80% at P13 and P34 from the latest expansion.

“This is part of the group’s strategy to double its revenue within the next three-to-four years.”

Investors were concerned that sluggish smartphone demand would affect Inari’s radio frequency (RF) division, given that RF accounted for 50% of the group’s revenue.

“The group said the volatile nature of the smartphone market was unavoidable but that it was adding new products, such as LED and VCSEL packaging, to cushion the potential weakness.

“However, it remains bullish on a stronger pick-up in RF demand, driven by mobile network migration from 4G to 5G that will require greater RF content in smartphones.”

The group is constructing a new production plant, P34, in Batu Kawan, Penang.

“P34 will be the largest production plant for Inari Amerton, with an estimated floor area of 640,000 sq ft, comprising three factory blocks. The group is targeting to complete the first phase covering 220,000 sq ft in September 2018.

“We understand the first block will be mainly to support a new LED business portfolio for its existing customer, Osram. Inari is planning to add new customers to fill the remaining area in P34, which is expected to be ready in May 2019.”

In addition, CGSCIMB said the group expects to see higher growth contribution from Inari Amertron following a completed asset consolidation exercise with the opening of its second plant in Clark, Philippines. THE ongoing review of infrastructure projects by the government has led to some uncertainties in the order book replenishment prospects of IJM Corp.

However, the company is in a good position to weather the cyclical domestic construction downturn, said Affin Hwang Capital, given its diversified construction expertise, competitiveness and geographical diversification.

“It is bidding for three building projects in Klang Valley and is targeting to secure at lease RM1bil worth of new contracts in 2019. Remaining order book of RM9.4bil, equivalent to four times 2018 construction revenue, will sustain its construction earning growth.”

“Its property division is seeing pressure on profit margin due to weak demand in the prolonged market downturn. But it has the advantage of low land cost and able to sustain its operation via staggered launches of mostly landed homes.

“The stock is trading at historical low forward price-to-earnings ratio (PER) and price-to-book.”

IJM Corp’s current 2019 PER of 12-times is also comparable to the construction sector’s weighted-average PER of 10-times.

“We reduce our realised net asset value per share estimate to RM2.75 from RM2.82 previously to reflect lower valuation for its plantation division. This is partly offset by higher valuation for its port given stronger long-term free cash flow after factoring higher cargo throughput growth.” MISC announced last Friday that it had signed a 16-year long-term charter contract with Hess Exploration and Production Malaysia B.V. (Hess) for the lease of a floating, storage and offloading facility (FSO), known as FSO Mekar Bergading, on a bareboat basis.

Based on an assumed exchange rate of RM4.05 to the dollar, Kenanga Research said the contract is estimated to provide an additional revenue impact of roughly RM112mil per annum, representing around 1% of 2018 to 2019 revenue.

“Assuming 50% margins from the contract would translate to a positive impact of around 3% to the group’s bottom-line earnings.

“However, do note that 2018 would only see a four-month impact from the contract, given its September commencement date.

“Nonetheless, the securement of this contract does indicate the group’s desire to seek growth opportunities within the offshore space, outside its forte in the stable liquefied natural gas (LNG) shipping segment.”

Kenanga Research said it is expecting 2018 to 2019 earnings to be weaker, plagued by continued losses in its petroleum shipping segment as spot petroleum shipping rates continue to show little signs of recovery on the back of tonnage oversupply.

“As at the end of the first quarter of 2018, 45% of its petroleum shipping portfolio is on spot charters, and as such, any continued weakness in spot rates would be immediately detrimental to earnings of the group.

“Nonetheless, bulk of the group earnings are still sustained by long-term LNG charters. The group’s low net-gearing of around 0.2-times also allows it to be well-positioned for further investment opportunities,” the research house said. The certification is valid for three years and the area covered is 149,756 ha (or 40% of Ta Ann’s concession area).

“This is the first FMU for Ta Ann to attain sustainable forest management certification under MTCS.

Ta Ann said the forest management plans for another two FMUs have been approved by Forest Department Sarawak.

It believed that Ta Ann should be able to increase its production of certified plywood products following the certification.

“However, earnings impact is likely to be minimal in the near term as plywood products margin tend to be small.

“Maintain sell call due to weak earnings prospect for both plantation and timber segment in the near term,” said the research house.