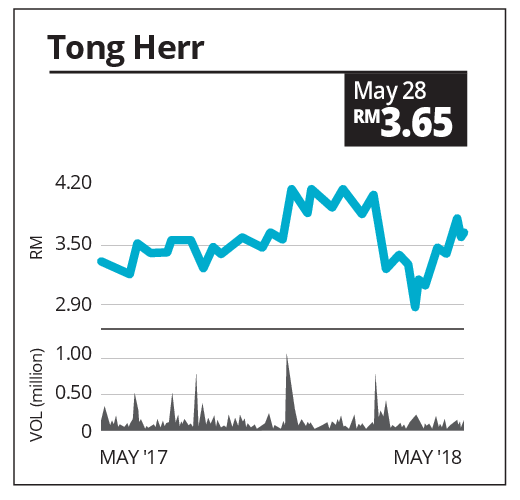 TONG Herr’s first quarter earnings of RM16.5mil were in-line at 27% of full-year estimates, according to RHB Research.

No dividends were declared as expected, the research house said.

“We lower our financial year 2018 (FY18)-FY20 forecast earnings by 5%-10% as we factor in higher raw material cost and update the US dollar to ringgit exchange rate based on latest in-house assumptions. While expecting softer margins ahead, we assume revenue would be supported by a broad-based global recovery in demand,” it said.

RHB Research also adjusted its margins assumption lower after factoring in higher raw material costs and the US dollar forecasts.

“In the first quarter, the group returned to net cash of RM26mil from the previous quarter’s net gearing of 0.01 times, despite operating in a higher raw material cost environment. We believe this helps to support its working capital moving forward,” it said.

“The group’s subsidiary in Thailand, Tong Heer Fasteners (Thailand) Co Ltd has commenced the building of its third factory in 2018, which is expected to commence operation in the first quarter of FY19 and is expected to produce a wider range of products,” it added. 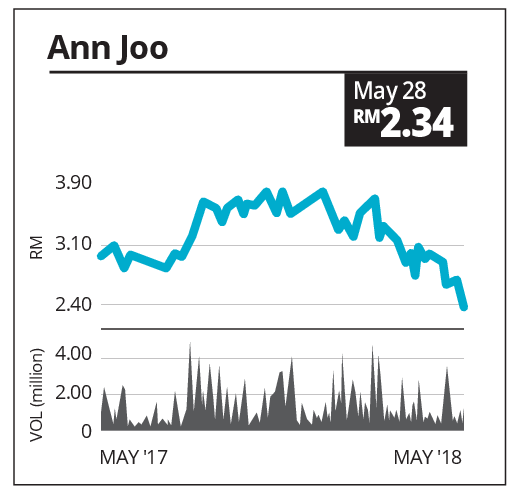 DESPITE first quarter earnings coming within expectations at 26%, Kenanga believes the recent change in government may see delays/deferment in construction projects, dampening the demand for steel products.

“Hence we decide to trim our FY18/19E earnings estimates by 20%/21% after accounting for slower market demand ahead. We are maintaining outperform rating with a lowered target price of RM2.75 while the current share price levels offer attractive yield of circa. 6.8%,” it said.

“First quarter core net profit of RM61.4mil is within ours / consensus forecasts of RM228mil accounting for 26% of full-year estimates. No dividends declared as expected,” it added.

“We highlight that net gearing continued to improve, to 0.58 times from 0.64 times in the fourth quarter of 2017. First quarter’s core net profit was down 17% year-on-year despite revenues being higher (+18%) as EBITDA margin was weaker (-8ppt) as the spread between steel average selling prices and raw material prices (scrap, coke, iron ore) were wider in the first quarter,” it said.

With a new government in power, Kenanga said its earlier expectation of jobs picking up post election is no longer valid.

“As major infrastructure projects (i.e. ECRL) gets reviewed while pending the new PH government firming up its policy on infrastructure developments, the least we can expect is for on-going and yet-to-be awarded construction jobs to be delayed,” it said.

With expectations of softer construction activities post change in government, Kenanga reduced its FY18-19 forecasted earnings down by 20-21% after accounting for slower steel demand on lower plant utilisation. 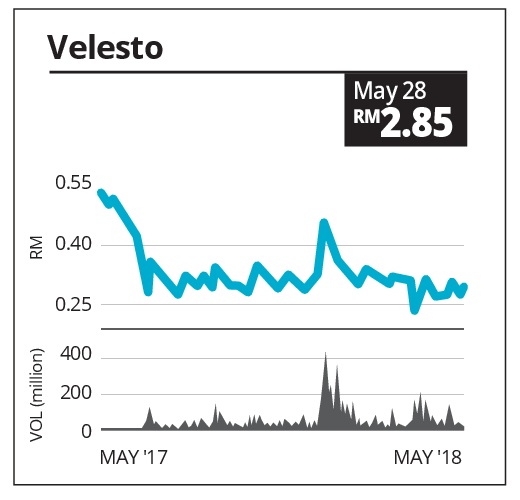 UMW Oil & Gas is now renamed Velesto Energy. Velesto is more enthusiastic of the jack up (JU) market now versus a year ago.

Velesto expects its JU utilisation to reach its peak in the second half of 2018, capitalising on domestic demand, which would see it returning to the black this FY, said Maybank IB.

“That is in-line with our assessment of the JU market and Velesto’s financials. We maintain buy and the 33 sen target price. Our valuations are based on 1 time enterprise value to replacement values,” it said.

“Of that 23:7 tenders are short:long-term charters. Velesto expects its second quarter JU utilisation to mirror the first quarter’s 65% before reaching optimal rates in the second half of the year. It expects to secure contract extension/ renewals for all its seven JUs from the third quarter from the domestic market, albeit on short-term tenures,” it said.

It noted that values are emerging with an improving risk-reward opportunity on a recovering JU market, and see values in Velesto. The research house said that the stock is now trading at an undemanding valuation of 0.9 times to our FY19 book value per share estimate considering that it is still generating positive earnings with a decent return on equity.

“We see value emerging for the stock. Although the group’s earnings are still lower compared the quarters before the impact of Mavcom’s policy, we are seeing a recovery in the travel insurance business while the underwriting performance for its general insurance business has improved in the first quarter,” it said.

It is not making any changes to its estimates for now as this is only the first quarter’s results, it said.

Tune Protect reported stronger core earnings (PATAMI) of RM17.0mil in the first quarter. This was contributed by a higher topline growth from the recovery of the group’s travel insurance business as well as a growth in motor premiums.

AMBank Research said its earnings for the first quarter were within expectations, accounting for 30.2% of our and 28.2% of consensus estimates respectively.

“Its wholly-owned subsidiary, Tune Protect Re (TPR) recorded an improved profit after tax of 3.9% year-on-year to RM12mil in the first quarter of FY18. This was supported by the bundling of its travel insurance with AIRASIA

packages and its initiative to implement dynamic pricing,” it said.