China’s import tariff on US soybean can support CPO prices

MUCH talked about in the palm oil’s sphere this week is China’s plan to impose a 25% tariff on the US soybean imports.

For decades, soybean has been a rival to CPO as the two commodities often compete for market share in China and India, the world’s largest edible oil markets.

According to plantation analysts, the imposition of a higher tariff will likely result in lesser US soybean purchase into China, which in turn could create a potential for CPO – as the closest substitute to soybean – to take on additional market share especially in China’s big food processing industry.

Currently, soybean is trading at a US$80-US$90 per tonne premium to CPO. 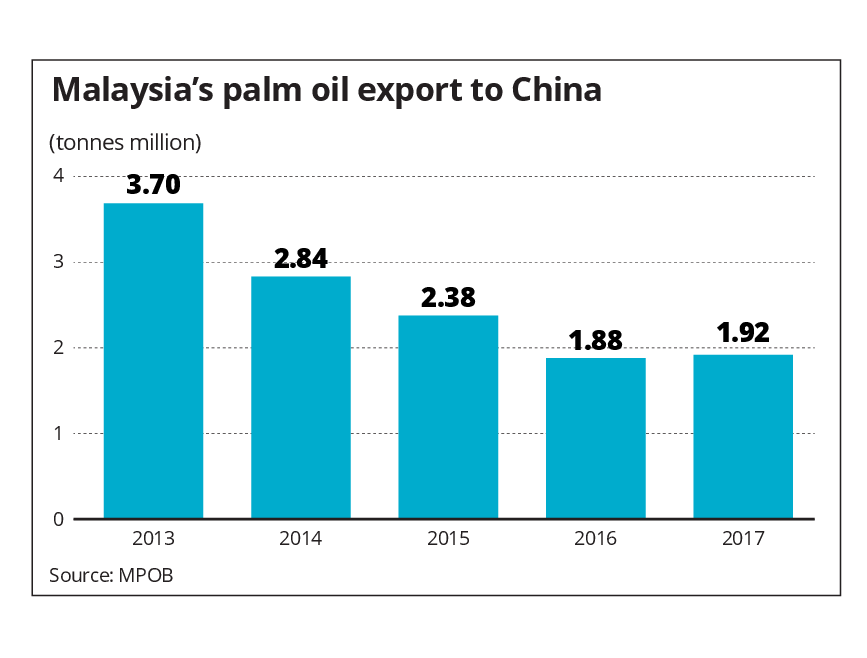 Some analysts expect the higher tariff on the US soybean could also result the CPO price discount to soybean to widen further making CPO more price-attractive to be imported into China.

So, the next question is will China decide to switch to Argentina and Brazil for its soybean supply to compensate for the US soybean?

To put into perspective, the US is the world’s largest soybean grower, of which about 33% of its production is exported to China with an estimated annual trade flow worth US$14bil.

Many analysts have also described the tariff on US soybean imports could be one of China’s biggest weapon in a trade war with the US which can put a dent in the US agriculture market.

This has boosted soymeal consumption resulting in the steady soybean imports from the US.

Industry expert MR Chandran tells StarBizWeek that the (25% tariff on US soybean imports) decision by China could also come back to hurt particularly Chinese pork producers as most of the soybean imports would be processed into pig feed.

“This move will raise prices on China’s staple food in the mid-term,” he adds.

Apart from soybean, China is also seen striking at the US agriculture industry given its tariffs on other agricultural products such as wheat, corn, cotton and beef – all aimed at the American farmers.

In the short-to-medium term, he also expects some additional demand for palm oil from China.

Another industry observer points out that the US “agriculture tax” war on China is actually creating a serious problem for the American farmers.

“For years, US soybean farmers and trade groups have been banking on China as their top export market given China’s position as the world’s single largest soybean importer.

“And now if (the tariff) imposed, the prices of soybean and other affected grains in the US will be immediately hit,” he adds.

Currently, the fundamentals for soybeans are bearish largely due to the large year-end stocks.

When news of China’s plan to impose higher import tariff on selected US agriculture grains broke in midweek, soybean futures on the US Chicago Board of Trade dropped as much as 5.3%, similarly with wheat and corn futures.

Meanwhile, Affin Hwang Capital Research believes that Chinese tariffs on American soybeans can be good for the palm oil-producing countries, especially Indonesia and Malaysia given CPO which can be a substitute for soybean oil.

“This could help to boost demand for our palm oil products and help to further lower stock levels,” says the research unit in its latest report.

Affin Hwang Capital Research points out: “Should demand for palm oil products pick up after the 25% tariff on US soybeans, this could potentially boost CPO prices.”

“There is a possibility of a short-term rally should this event (tariff) materialise. For now, we are maintaining our CPO average selling price assumption for 2018-2019 at RM2,600 and RM2,500 per tonne respectively.

As at 5pm yesterday, CPO futures contract for June is trading RM33 higher at RM2,505 per tonne.

Kenanga Investment Research is maintaining a “neutral” call on the plantation sector with an unchanged 2018 CPO price estimate of RM2,400 per tonne.

“The first quarter 2018 CPO prices averaged RM2,469 per tonne, which is close to our RM2,500 per tonne forecast for the quarter.

“With inventory to continue building up, we expect second quarter 2018 CPO prices to average RM2,400 per tonne. Given a weaker price outlook, large-cap integrated planters have and should continue to perform well thanks to their better earnings stability, but mid- and small-cap upstream producers are likely to track CPO price performance.”