Soam: IJM’s financial year ends in March. We hope to get a couple more jobs if possible. — Bloomberg

, which is among the companies eyeing the civil works of the high-speed rail (HSR) project, is confident of improving on its order book which stands at a record high of RM9.3bil.

However, with three more months to closing its books for the year, the company with extensive interest in property, toll highways and plantations, has already bagged RM2.7bil worth of jobs.

“IJM’s financial year ends in March. We hope to get a couple more jobs if possible,” he told reporters at Invest Malaysia 2018 here yesterday.

IJM, which has a strong execution team, has been selective in tendering for jobs. It is one of the few large construction companies that did not bid for projects in the Sarawak portion of the Pan Borneo Highway.

It has thrown in a bid for project delivery partner (PDP) in the civil works portion of the HSR project.

The project is estimated to cost RM30bil and the PDP gets a fee for ensuring the project is completed on time and within cost.

Last month, IJM announced that it had formed a partnership with Sunway Construction Group Bhd

and privately-held Jalinan Rejang Sdn Bhd and Maltimur Resources Sdn Bhd to bid for the civil works portion of the HSR project.

They face competition from the joint venture of Gamuda Bhd

Jalinan Rejang and Maltimur are the PDP for the Sarawak portion of the Pan Borneo Highway. Maltimur is linked to the influential Tan Sri Bustari Yusof.

“We are very focused on tendering jobs that we think we have an opportunity to win, given that our order book is already huge,” said Soam.

IJM, which also has built highways in India, has an order book that is evenly distributed among the civil infrastructure, roads and building segments of the construction industry.

Some of the mandates on hand are the building of the Hongkong Shanghai Bank, United Overseas Bank, Uptown 8 office towers and the Bukit Bintang City Centre shopping mall.

On the property market, Soam said that there were a lot of headwinds.

“There is always demand for properties in good locations. The overhang is due to overpriced properties or those in the wrong locations,” he said.

Last year, IJM’s property segment achieved sales of RM1.4bil and it is looking at hitting RM1.6bil for the current financial year.

For its third quarter ended September 2017, IJM had achieved sales of more than RM1.2bil from its property segment and is sitting on unbilled sales of RM1.9bil.

The sales were driven largely by anchor projects such as Bandar Rimbayu and Seremban 2 as well as Riana South and Riana Dutamas.

On the outlook of crude palm oil prices, Soam said the group is forecasting the commodity to range between RM2,500 and RM2,700 per tonne. 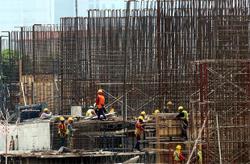