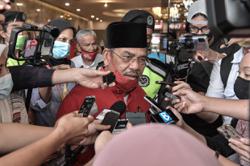 “After completing 2,000km of testing and commissioning for service and boosting additional new features, the vibrant new formed four-car train was put into service – a few hours after the final pre-operation run with Rapid Rail chief executive officer Datuk Zohari Sulaiman and key members of the project team from Prasarana Integrated Management and

The move is part of Prasarana’s efforts to transform urban rail services. The new four-car trains will ensure comfort and less waiting time for passengers. The new trains will also have enhanced features including better signages, dynamic route map display to indicate travel direction, previous and arrival station, and next station information.

The new trains will also feature an enhanced rail lubricator system to reduce noise between rail and wheel interface, new LED lighting as well as the passenger information system for infotainment, four units of CCTV and a designated wheelchair area for the OKU (persons with disabilities) in each car,” Zohari said.

According to Zohari, the project involves the refurbishment, rectification, upgrading works, coupling of 34 sets of two-car train to form 17 sets of four-car train and upgrading of the wayside systems.

He said that next married four-car trains would be delivered in stages between 2018 and 2020.

“By the year 2020, Rapid KL LRT Kelana Jaya Line will be fully serviced by all four-car trains.”