Smart partnership: Ameer (left) and Noor Azam at the launch of the iMeriah Takaful. AmMetLife Takaful and Mydin has teamed up to offer iMeriah for eligible Mydin Meriah card members nationwide.

Managing director Datuk Ameer Ali Mydin, who predicts challenging times ahead for the industry, said the hypermarket segment, which mainly targets the low to middle-income group, is already affected.

“The retail business is down ... and so is the hypermarket segment ... and this is scary,” he told reporters after the launch of the iMeriah Takaful coverage plan.

The takaful plan provides coverage against death with takaful benefits in the form of goods instead of cash. Mydin Meriah card members aged between 18 and 49 years old are eligible for iMeriah.

“It’s scary because the hypermarket segment caters to the low to middle-income group ... and if they can’t afford to buy things, then it will have an impact on our economy.”

Ameer said “per basket purchases” within its stores had been going down. “This shows that people don’t even have money to spend on necessities. When there is a slowdown, customers start cutting down on things that they don’t need. Necessities such as groceries don’t usually go down.”

Ameer, however, hopes the general election (GE) next year will boost consumer spending.

“We pray that with the upcoming GE, the Government will do something to boost spending.”

Sales in the Malaysian retail industry contracted 1.1% in the third quarter on eroding purchasing power, according to a report compiled by Retail Group Malaysia (RGM). For the first nine months of this year, the retail sales growth rate was 1.9% as compared to the same period a year ago, it said.

RGM said all retail sub-sectors suffered decline in sales in the third quarter, except pharmacy and personal care and other specialty retail stores sub-sectors, which reported a 6% growth.

Despite selling basic necessities, the supermarket and hypermarket sub-sector reported the worst result during the latest quarter. For the third quarter of 2017, retail sale of this sub-sector dropped by 5.2%.

“There are 11 takaful operators in the country and we are the eleventh. We hope to improve our position, to maybe eighth, within the next three years,” he said. 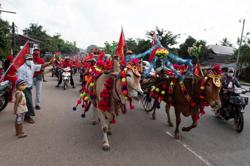